There's a B.C. TV show pilot starring John Candy that nobody ever saw

This episode of BC Was Awesome contains the first interview I ever conducted for our show. It's from the season we released in 2016.
Oct 18, 2019 4:52 PM By: Bob Kronbauer

This episode of BC Was Awesome contains the first interview I ever conducted for our show. It's from the season we released in 2016.

In it I travel to Campbell River to find one of the only remaining VHS copies of a 1980s TV show pilot that's legendary there.

I had read about "Break Away Outdoors" in the autobiography of Canadian broadcaster Terry David Mulligan.

The concept was to combine a fishing show and an interview show.

Talking about the opportunity to have the comedian as the guest on the pilot, Mulligan told me that "John Candy, in a boat, on the water, was maybe the best interview I was going to get with him... because what he did best was play a fish out of water."

He wasn't able to dig up a copy of it for me to watch, but after some persistence I tracked down a copy in Campbell River, at the resort where the pilot was filmed. So we went to Dolphins Resort and did a viewing in their lodge.

The 1980s show itself was admittedly pretty... well... not great. However as you'll see in this episode I was thrilled to watch it because of the talk that has surrounded it for decades.

Candy is hilarious as expected, but it jumps from one scene to the next in a bizarre fashion, and you leave it knowing why the pilot didn't get picked up.

While it wasn't the greatest show of all time one thing is certain: the lore that has grown around it is like no other show ever produced in this province.

BC Was Awesome is a British Columbia history TV show co-produced by Vancouver Is Awesome and Artaban Productions. A book of the same name is set to be published in time for the province's centennial celebrations in 2021. Watch all of the episodes for free on OUR YOUTUBE CHANNEL. 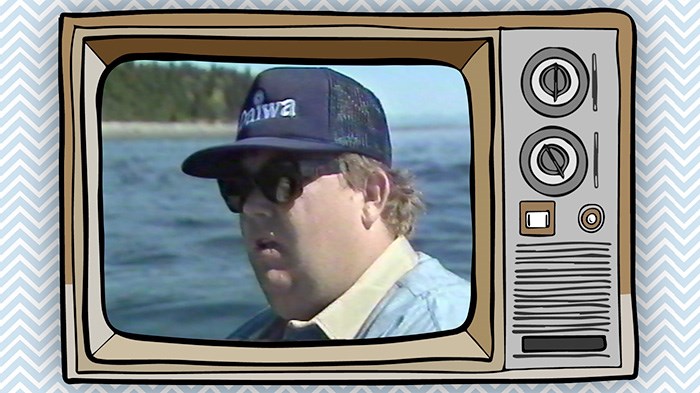 John Candy on a fishing boat, for the pilot of Break Away Outdoors. Screengrab