"We are pleased to announce that we are hosting some V.I.K. (Very Important Koi) guests here at #VanAqua. They have quickly won over the hearts of aquarists, and we’re happy to support Dr. Sun Yat-Sen Classical Chinese Garden and Vancouver Park Board during this rescue mission," declared the Vancouver Aquarium Thursday on Facebook.

The otter first appeared over a week ago, and began to make many a meal of the fish in the pond--including a prized koi named Madonna, who was among the dead.

Madonna was more than 50 years old and had lived in the garden’s pond for more than two decades.

It's believed the otter showed up in the dead of night by squeezing through the bottom of a gate and headed for the koi, which were donated by the Korean pavilion after Expo 86, said Howard Normann, director of park operations for the city. Many of the adult koi had been living in the pond since that time--over 30 years.

Vincent Kwan, executive director of the garden, said staff had become attached to the koi, which symbolize perseverance, transformation and happiness in Chinese culture.

"It goes back many thousands of years from legends' perspective," he said. "They are elements that are ingrained in Chinese culture."

"Everyone in the community knows Madonna," he said. "I think a lot of people are still trying to digest what has happened and it's certainly very emotional."

The otter ultimately took the lives of 11 of the fish.

He also has evaded capture, and seems to have moved on from the Chinese Garden for now. 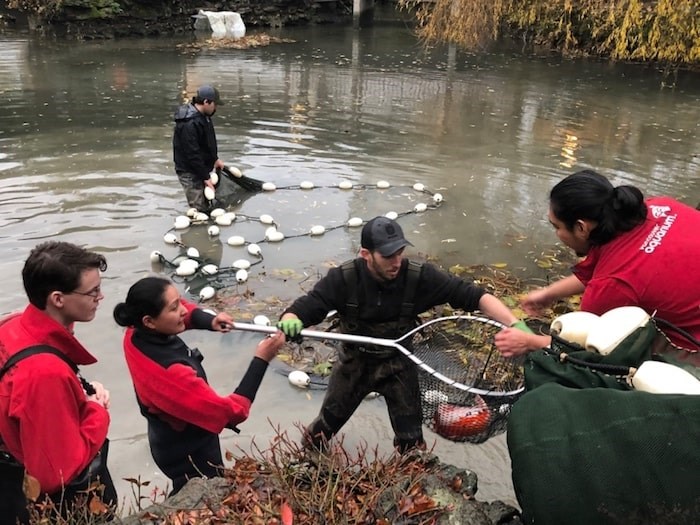 The Garden has devised some protections against further otter invasions. Two surveillance cameras will also be placed around a pond that was home to the garden's collection of decorative koi, Normann told a news conference at the garden Thursday, when the facility reopened to the public after closing on Nov. 20.

Currently the koi can likely expect to be in the care of the Aquarium for several months. Normann says they probably won't make the call the return them to the Garden's pond until springtime.

Luckily, however, the koi's population isn't all bad news.

“The surprising thing for us was that even though before we didn’t have a lot of baby koi, since we re-developed this pond a year and a half ago and re-opened it, it looks like the large koi were spawning so there was 344 baby koi taken out of the pond,” Normann said.

The plight of the koi and the otter has certainly captured the attention of many in Metro Vancouver, with a division between those on #teamkoi or #teamotter. Earlier this week, even B.C. Premier John Horgan shared his thoughts (with a smooth political spin, to boot):

With files from The Canadian Press and Jessica Kerr/Vancouver Courier