Dumped waste is a growing problem, and city taxpayers are left paying for the cost of the clean up, according to the regional authority.
Apr 15, 2019 3:49 PM By: Diane Strandberg

The joy of spring cleaning quickly turns to discouragement as the size of the junk pile grows.

As practitioners of the Marie Kondo method of tidying up know, unwanted items can weigh you down. But getting rid of them isn’t easy either. 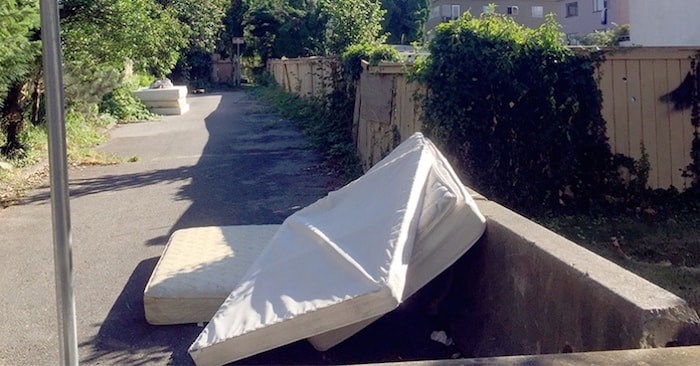 It costs $15 to take a mattress to the Coquitlam transfer station, but too many people think it’s a hassle and will just dump their beds instead. MetroVancouver is trying to change that. Photo courtesy MetroVancouver

Thrift stores will take clothes and smaller household items, some charities such as Big Brothers will collect items, too.

However, thanks to Metro Vancouver, which is promoting its Waste in Its Place campaign this spring, there is help out there.

A Put Waste in its Place website provides locations for disposing items safely and legally.

Everything from household items to construction material is listed in the handy-to-use website, providing a number of no-cost or low-cost ways to get rid of unwanted items.

“We are all taught from a young age not to litter,” said Jack Froese, chair of Metro Vancouver’s Zero Waste Committee in a press release. “We know it’s wrong, and with so many cost-effective — even free ways to properly dispose of waste — it’s perplexing that some people still choose to dump their unwanted items on the side of the road, in our parks, and alleyways.”

What MetroVancouver is trying to do with its Put Waste in It’s Place campaign is to instill in people a feeling of responsibility for unwanted items instead of simply discarding them in the nearest back alley or green belt.

Dumped waste is a growing problem, and city taxpayers are left paying for the cost of the clean up, according to the regional authority.

In 2018, for example, Metro Vancouver municipalities recorded over 40,000 incidents of abandoned waste.

Mattresses, furniture, appliances, electronics and green waste are among the most commonly dumped items and the majority of incidents were attributed to home renovations, students and move-outs.

“There is simply no need to abandon waste,” Froese noted. “In addition to free municipal collection services, many delivery companies will take away old mattresses or appliances for a small fee, which is much cheaper than receiving a fine for illegally dumping.”

Taking responsibility for one’s waste means finding out the best option for disposal and taking it there or hiring a service to deal with the unwanted item.