Lil Nas X was scheduled to play at UBC’s Welcome Back BBQ Friday, Sept. 13, but the rapper unexpectedly cancelled his performance mere days in advance.
0
Sep 10, 2019 5:26 PM By: Elana Shepert

Lil Nas X was scheduled to play at UBC’s Welcome Back BBQ Friday, Sept. 13, but the rapper unexpectedly cancelled his performance mere days in advance.

Hailing from Atlanta, Georgia, Lil Nas X rose to fame this year with his smash-hit "Old Town Road" featuring Billy Ray Cyrus. In fact, the single set a Billboard record with an unprecedented 17 weeks in the top spot. He was also the first artist to come out as gay while at number one on the charts.

AMS Events shared an Instagram PSA that stated, "Due to circumstances beyond our control, Lil Nas X has opted to cancel all performances this week."

They add, however, that the, "show must go on," and introduce a new line-up of artists for the school's Welcome BBQ Party. They also add a cheeky remark about how they heard that Ellen Degeneres will have a "special guest" on her Friday show - but they can't confirm who that guest will be. 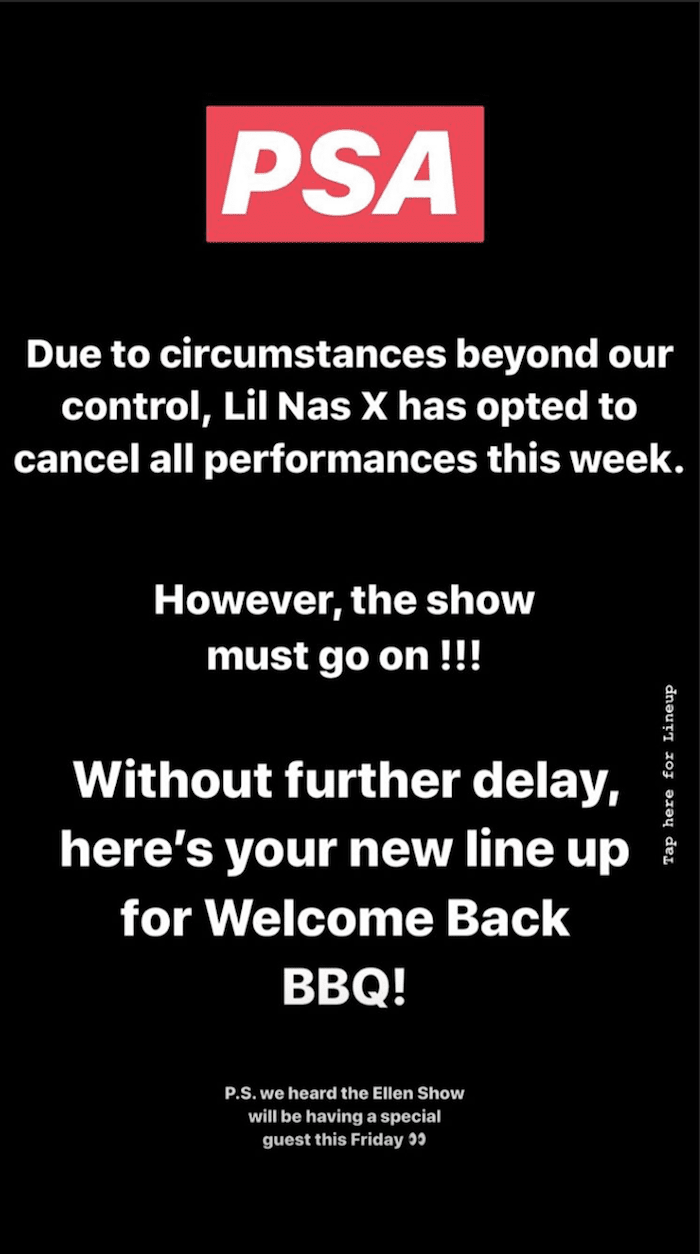 UBC's student newspaper, the Ubussey, reports that AMS Events will replace the rapper with Lil Mosey and YBN Nahmir. However, the lineup will still include A$AP Ferg, What So Not, Murda Beatz, Boslen and MGH.

And while Lil Nas X is a huge act, AMS Events confirmed that the headliner has always been A$AP Ferg and therefore the headlining act will not change. Furthermore, it adds that the event is about more than the musical line-up and about the spirit of the event itself.

Ticket holders, however, were not too thrilled about the change in plans.

elmo is upset he won’t get to see ⁦@LilNasX⁩ at the ubc welcome back bbq this friday pic.twitter.com/r82mmjljxX

@LilNasX bruh how could u do this the only reason I bought concert tickets was to see u and u drop out not UBC???? MY MANSSSSS WHYYYYYYYYYYY

Hey @LilNasX why you dipping on UBC man, not cool pic.twitter.com/vgfcaYnEUn

@LilNasX why aren’t you coming to ubc anymore??? I’m literally so sad pic.twitter.com/3GvvQ2ReVH

Vancouver Is Awesome reached out to Chris Hakim, President, AMS Events, who has not responded for comment.

It is unclear if any money will be refunded for tickets at this time.

Lil Nas X also cancelled a show in Winnipeg this Sunday, Sept. 15 during Frosh Week at the University of Manitoba. With that in mind, The Manitobian reports that other artists, such as Tyga, Faouzia and Myazwe, are still slated to perform.