If you’ve been following LG 104.3FM 's vanCOVER then you know that they’ve called on local artists to record covers of songs from the 70’s or 80’s which have influenced them as musicians, and the winners so far have been amazing.
0
May 11, 2015 8:15 AM By: Bob Kronbauer 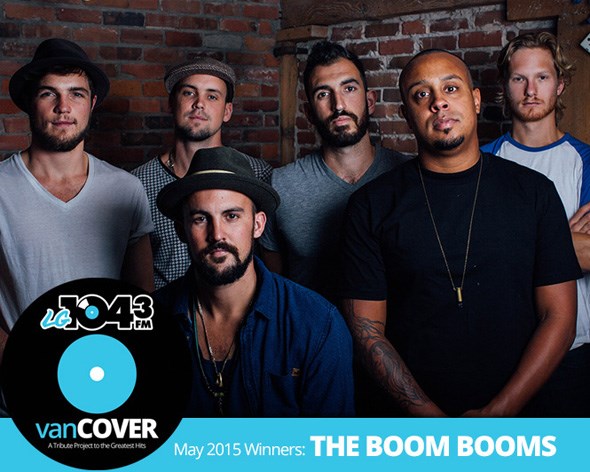 If you’ve been following LG 104.3FM's vanCOVER then you know that they’ve called on local artists to record covers of songs from the 70’s or 80’s which have influenced them as musicians, and the winners so far have been amazing.

Each month a jury selects a 1st place winner who receives $5,000 and a 2nd place who receives $1,000, and throughout the year a number of live showcases featuring the winners will be held that you can (and should) attend.

Here’s The Boom Booms’ version of The Stevie Wonder’s Superstition, this month’s $5,000 winner!

We asked the band’s keyboardist, Sean Ross a few questions about this track and their influences...

How did you choose your cover song?

Superstition is a beast of a song that we've worked into our live set. It’s timeless and hits all generations. There are 16 individual layers of Clave recorded on the original - this song was really interesting to dissect as a 6-piece band, using some different instruments than the original, and making use of all our members.

When did you first discover Stevie Wonder?

My old brother and Boom Boom singer Aaron Ross ordered “Natural Wonder” off Columbia House (for those who are old enough to remember :)) We must have been 12 and 10.

If you could perform live as one 70s or 80s band or artists, who would it be and why?

I’m a massive Stevie fan and have dreamed of touring 'Songs in the Key of Life' in the 70s... having said that, who hasn't dreamed of being Michael Jackson during the Thriller days, arguably the pinnacle era of live performance and songs.

Has music from those decades inspired your own music, beyond this recording?

From the Stones to Jimi, Bob Marley, Bill Withers, Elton John and Stevie of course, the music from that era completely defined my taste and love for music. What you heard as a kid will always influence what you create. It most definitely can be heard on our current album 'Love is Overdue' (available on iTunes ;)).

What’s coming up for you?

We are headed to Toronto to continue our album release tour for “Love Is Overdue” (dates on our tour page of our website) and around the corner we are proud to be announcing our back alley-born baby: East Van Summer Jam 2015! East Van's music and culture festival is in its second year and will be happening July 4 in Strathcona park. Shout outs to The Music Tree and our friends at Timbre Concerts for all the hard work.