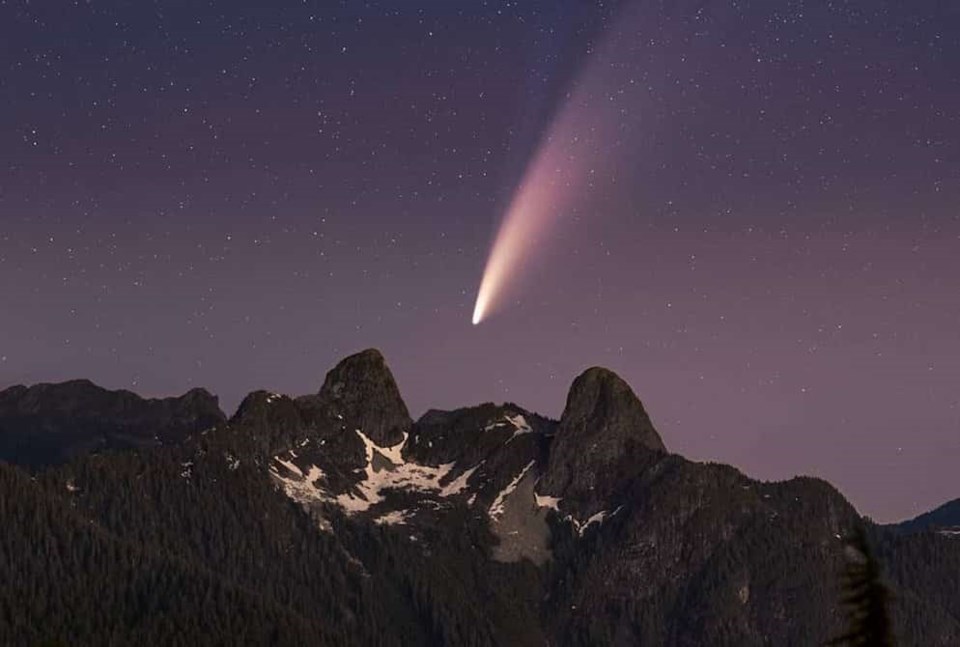 British Columbians are sharing images of a recently discovered comet that will be visible over B.C. for the next couple of weeks, before disappearing again for thousands of years.

What's more, the astronauts aboard the International Space Station spotted it from their vantage point high above Earth's atmosphere.

"From its infrared signature, we can tell that it is about 5 kilometers [3 miles] across, and by combining the infrared data with visible-light images, we can tell that the comet's nucleus is covered with sooty, dark particles left over from its formation near the birth of our solar system 4.6 billion years ago," said Joseph Masiero, NEOWISE deputy principal investigator at NASA's Jet Propulsion Laboratory in Southern California.

Comet NEOWISE photographed over Vancouver this morning.
The best time to see it is around 3am - that will be getting earlier each night, although the comet will be getting fainter as it travels out into the solar system.#comet #cometNEOWISE #NEOWISE #vancouver @c2020f3 pic.twitter.com/xug7BHgMSW

Comet C/2020 F3 Neowise over Vancouver! We took this image around 11pm last night, but I first spotted it at 10:15pm. Image credit: Jordash Kiffiak and Joanna Woo pic.twitter.com/d9q5q8ZsXD

Watch a short video from the H.R. MacMillan Space Centre about how to find the comet.

With files from The Associated Press and Roxanne Egan-Elliott.