It's part of a collective 'Love Your City' campaign

Brendan Kergin
Jan 28, 2021 3:48 PM
Previous Next
1 / 1 The umbrellas will be hung above Bill Curtis Square and thee balls will go in the trees.Yaletown BIA
Expand
Previous Next

A giant's handful of giant 'candy' hearts, a community chalkboard and a whole bunch of pink polka-dot umbrellas are just a few of the ways local business organizations are encouraging Vancouverites to explore local neighbourhoods this February.

While different business improvement associations (BIAs) usually do something for Valentine's Day, this year 16 are joining forces for the 'Love Your City' campaign. Annette O’Shea, the executive director at Yaletown BIA, explains BIAs from the downtown as well as other parts of the city, like West 4th in Kitsilano, Mt Pleasant and the Hasting-Sunrise's 'East Village' will be participating.

"We are all doing love themed art installations," she explains. "They’ll all be outdoors."

In Yaletown it'll be in Bill Curtis Square where the colourful umbrella installation is being changed up with pink polka dots on the umbrellas and giant neon pink balls emblazoned with 'LOVE.'

A post shared by Love Your City Contest (@loveyourcitycontest)

"It should be really brilliantly coloured and make people feel happy," O'Shea says.

In the West 4th neighbourhood, Jane McFadden (executive director at Kitsilano West 4th BIA) says giant 'candy' hearts are being built by a local artist (out of wood, not candy) and will be installed for the month.

"In other neighbourhoods there are murals, there’s a bunch of different things, not all of us are doing the same thing," she explains.

"They’re set up so you can take a selfie and have some fun with it," says O'Shea of all the installations.

'Love Your City' isn't just the addition of the month-long art pieces; there's also a contest and charitable component.

Each BIA is also donating to a charity. Some are working with local not-for-profits in their area, like a food bank, while others are donating to the Heart and Stroke Foundation of Canada (February is heart month in Canada).

In Yaletown, dogs will also be part of the fun; O'Shea says her staff will be handing out special Valentine's tags (and some with COVID-19 references) during the month to anyone they see taking a pic with their dog. 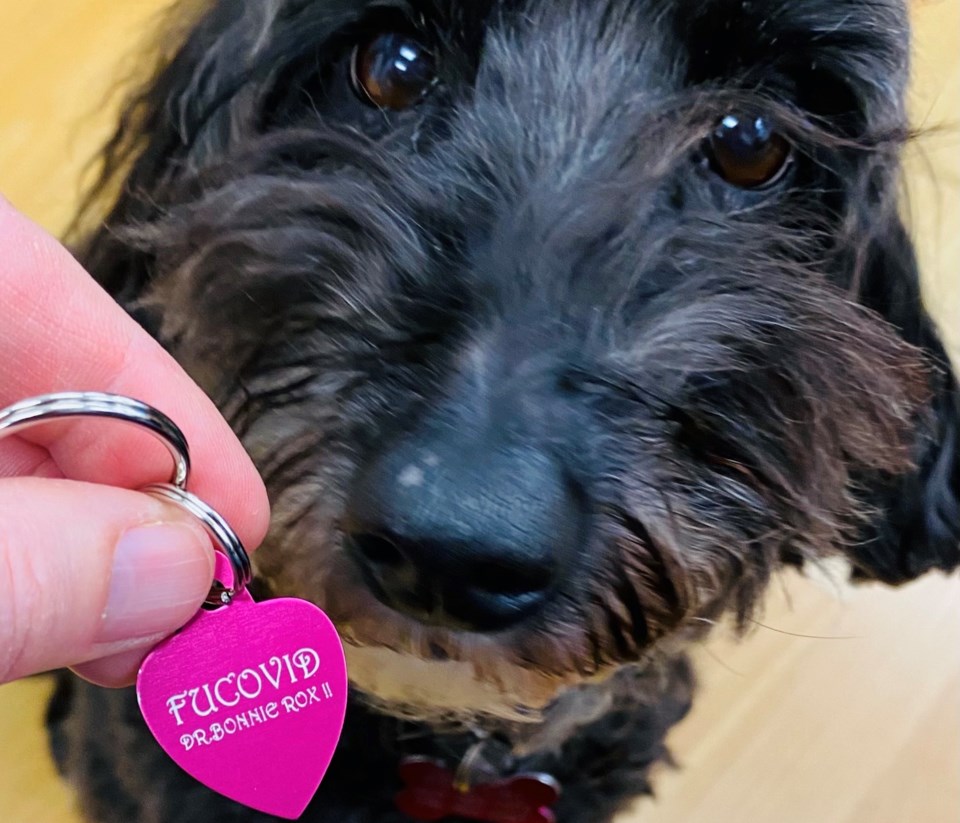 Some messages on the dog tags are more subtle than others. By Annette O'Shea

"We’re also going to make some heart-shaped bandanas for dogs," she adds.

The different installations will last all month, so people can visit them on their own schedule, O'Shea adds.

The city's BIAs have been meeting online more regularly since the pandemic started in an effort to keep their neighbourhoods active. McFadden notes they've had a mix of success stories and losses. The West 4th neighbourhood has a bunch of outdoor gear shops that have been doing well as people seek new outdoor activities, but others, like a local dressmaker, haven't been able to keep the doors open.

"We’ve lost nine businesses during Covid, that have closed," she says.

The hope is 'Love Your City' will get people to move around the city in a safe manner.

"We’ve created this 'Love Your City' campaign so you can go around your city safely," O'Shea says.