Luv-A-Fair nightclub was a Vancouver institution from the early 1970s into the early 2000s. The designer of its logo from 1975 discusses his work on it, and his memories of the club.

Luv-A-Fair nightclub was a Seymour Street institution starting in the 1970s. Initially a gay disco, it transitioned into a new wave and punk haven in the 80s.

It was described by MuchMusic's Kim Clark Champniss as "a giant warehouse at the intersection where the red light and gay districts met", and if you ever went you likely have fond memories of the place.

Sadly, it closed down in 2003 to make way for a condo development. However its memory and its place as a vital thread in the fabric of our very makeup in Vancouver lives on; we've released a t-shirt in collaboration with the designer of one of their early logos, from 1975.

Steven R. Gilmore was just 18 when he designed it, and in his words,

"You could count on one hand the amount of commercial design work I had done previously so I was a little anxious to take on the job. I didn't even have the proper tools for the task! Thankfully the manager Kenny was a friend I had known from Calgary and he had more faith in my abilities than I did.

At the time the Luv-A-Fair was a "Gay Disco" but in just a few short years it would become the biggest "Post Punk" and "New Wave" club on the west coast of Canada, if not the country. Although it was a gay venue (heavily leaning towards a female impersonator clientele) they didn't have a strict all-gay policy, and because it provided a safe environment for others to express themselves the club also attracted a lot of the alternative art and music crowd and fashionistas. It was Vancouver's "Island of Misfit Toys".

As the club became increasingly popular with the alternative crowd ultimately a sit-in was staged on the dance floor one night demanding that the club play music other than disco. The club reluctantly conceded to hear us out and Kenny (the manager) asked me to be a liaison between him and the protesters and supply him a list of the songs and bands I thought the club should play. It didn't take long before they hired a new DJ, Michael Wonderful, and the history of Vancouver nightlife changed forever.

As faith would have it, in 1980 I reluctantly became the new resident DJ. On Halloween night because of differences I was never privy to, Michael Wonderful decided he had had enough and stormed out of the club leaving Kenny high and dry with an empty DJ booth. Because I had given Kenny the list of songs a year or so earlier he approached me and asked me if I wanted to try and DJ. Having absolutely no experience as a DJ I nervously said yes then immediately broke out in a cold sweat wondering what the hell I just agreed to. I was so incredibly lucky that cEvin Key was the light man for the club that night because he showed me how to operate all of the equipment and taught me some basic DJ skills. By the way, I don't think cEvin Key was even old enough to be in the club let alone working there. But thank God he was, because he saved my ass.

About four years later I choose to quit DJing because my visual arts career was taking off, and quite frankly I was burnt out. For good or bad, that short stint at the turntables ended up being the catalyst to my decades long involvement in the music industry.

The Luv-A-Fair still holds a special place in my heart. Not only was it a safe haven for this confused country boy who had just moved to the big city, but I met a lot of wonderful people there who I am still friends with to this day."

You can purchase the t-shirt HERE. 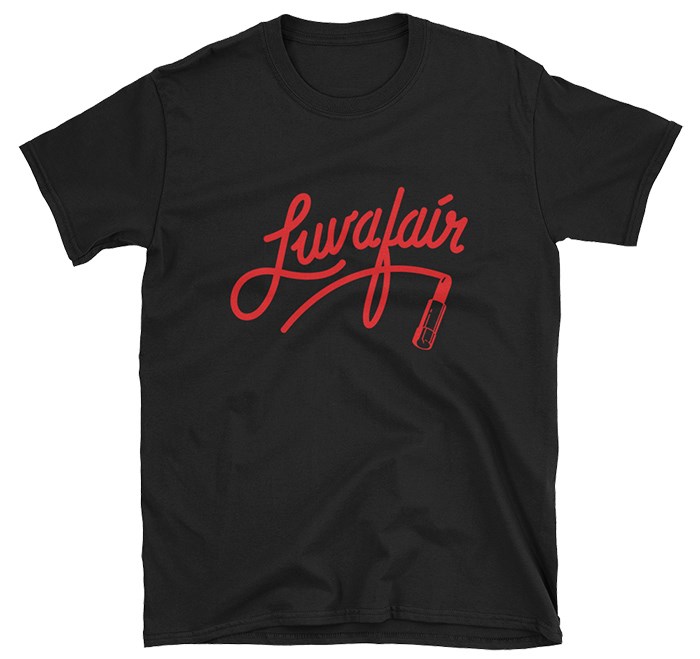