The event is called the Ma Murray Awards, named after “Canada’s crusty queen of publishing” (as she was called in the latest book to be written about her).
0
May 3, 2019 2:59 PM By: Grant Lawrence 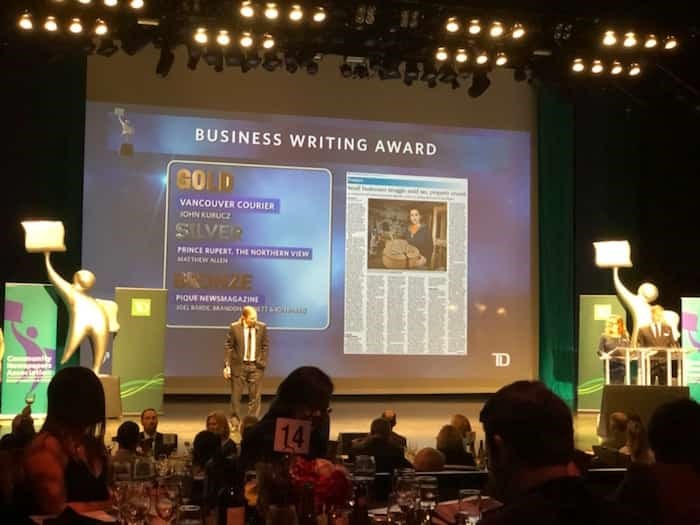 Community newspaper types got spiffied up for the annual awards night at the River Rock Casino in Richmond. Photo Michael Kissinger

There’s an awards show for everything else, so why not community newspapers? You may not know it, but every year, several hundred reporters, editors, publishers, photographers and columnists from publications just like this one all gather together in the glittering showroom of the River Rock Casino in Richmond.

There, we celebrate each other, with trophies and copious amounts of free booze, thanks to the BC & Yukon Community Newspaper Association.

The event is called the Ma Murray Awards, named after “Canada’s crusty queen of publishing” (as she was called in the latest book to be written about her). Margaret “Ma” Murray was an infamously sharp-tongued and often coarse columnist, editor and publisher for several community newspapers throughout B.C. in the 20th century.

A couple of years ago, I received my first taste of the Ma Murrays, when I won a trophy for a story I did on the history of the West Fourth Avenue hippie scene. This year, I was invited back to the bash, having landed a nomination for a column I plunked out on renowned Canadian sculptors Mary-Ann Liu and Paul Slipper.

As you walk in to the River Rock show palace lobby, you are greeted by giant framed photos of the stars who have rocked that stage: Lionel Richie, Andre Philippe Gagnon, Joan Rivers and Bob Saget. 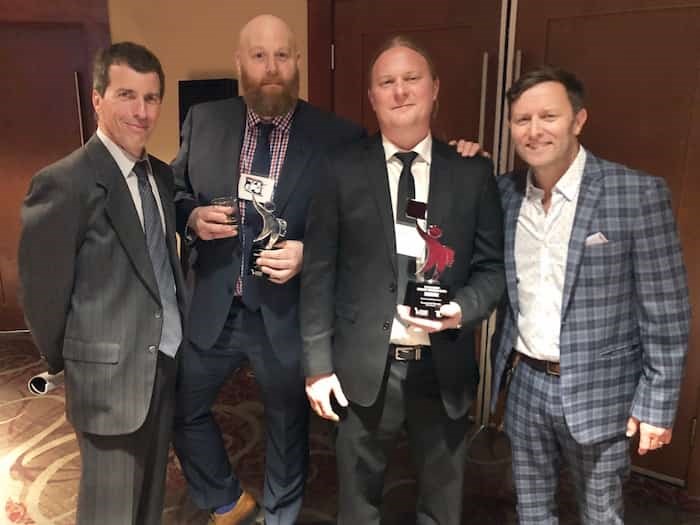 Inside the showroom, a gigantic disco ball the size of a small planet hangs overhead while you find your way to your circular table, Golden Globes style. Instead of bottles of champagne on ice, my wife loved that we received an endless supply of wines from Tinhorn Creek out of Oliver, B.C. I personally appreciated that the bar was also serving ice-cold cans of Lucky Lager.

The event was hosted by the affable local sports television hosts Jody Vance and Perry Solkowski. Both were smart, funny, at ease, and kept the long, long list of awards moving at a steady clip.

One particular highlight was when a winner wished his wife, who was at home, a happy birthday. To many a guffaw from the crowd, Solkowski and Vance pointed out that, since the awards show wasn’t on TV, his wife couldn’t hear him and maybe, since the evening included a three-course salmon dinner and bottomless drinks at a fancy resort hotel, he should have brought her, since it was, in fact, her birthday. Next time!

Over the course of the night, community newspapers such as the Hope Standard, the Trail Times and the Squamish Chief all won various awards. And while the newspaper business is not always the most lucrative of pursuits in modern times, the people that filled that room on Saturday night are passionate, talented storytellers, and believe very much in the spirit of community and the power of the press.

It was great to run into media folk that I have met in my travels around B.C., from proud papers such as the Powell River Peak, the Prince Rupert Northern View and Valemount’s Rocky Mountain Goat. I took particular pride in seeing my venerable hometown paper the North Shore News win several awards, including the gold medal in the category of Newspaper Excellence.

As the debaucherous night stumbled forth, it became clear that the Ma Murray Awards are a huge reason to let loose for a lot of the nominees who had come in from smaller towns for the weekend.

Out in the lobby, while my wife and I posed for a selfie back dropped by the giant Lionel Richie picture, a very drunken, disheveled fellow from an interior B.C. newspaper that I shall not name shouted, “Hey, I wanna to do that!” He then insisted on replicating the picture with my wife and Lionel Richie. I think he may have mistook Jill and her very colourful dress for a River Rock showgirl.

That was only slightly less awkward than my conversation with one of the sponsors, once I realized who they represented: the Trans Mountain Pipeline. “Yeah, well, good luck with that.” “Don’t need your luck, buddy, but thanks.” “I guess we’ll see about that, won’t we?” “You’re damn right we’ll see.” “NO, WE WON’T.” “YES, WE WILL.”

Oh, and that award I was nominated for? Alas, eight cans of Lucky Lager proved only to predict a hangover. I lost to a lovely story in the Gulf Islands Driftwood. But hey, my tablemates from the Vancouver Courier and the Dawson Creek Mirror picked up some well-deserved hardware and, really, it’s all about showing up, and being part of the community, right? In the immortal words of Ma Murray, “That’s for damshur!”