RCMP in Manitoba have found several items linked to two suspects wanted for killings in British Columbia.
0
Aug 6, 2019 2:52 PM By: The Canadian Press 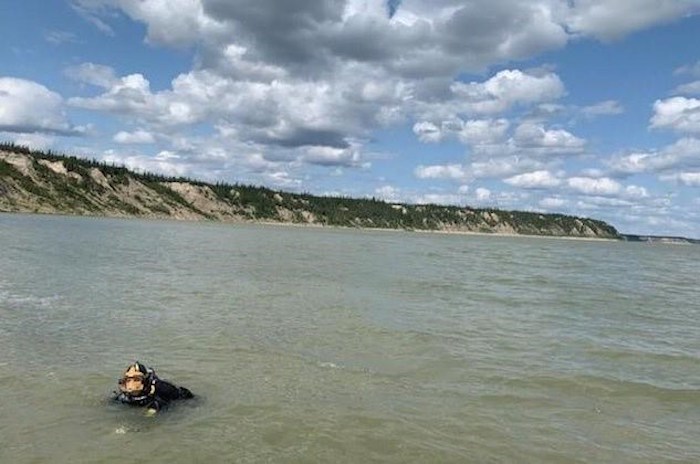 The RCMP Underwater Recovery Team completes their work following the discovery of a boat on the shore of the Nelson River, northeast of Gillam, Man. in this handout photo provided August 5, 2019. RCMP say they will no longer be searching a river in northern Manitoba for two murder suspects.THE CANADIAN PRESS/HO, RCMP

Mounties would not disclose what the items are but said they were discovered on the shore of the Nelson River on Friday.

"We have confirmed that these items are directly linked to the suspects," Cpl. Julie Courchaine said Tuesday in Winnipeg.

The search for Bryer Schmegelsky, 18, and Kam McLeod, 19, has focused on the remote area around the town of Gillam in northeastern Manitoba, since a burned-out Toyota RAV4 they were driving was found there July 22.

The latest items were located only nine kilometres from the vehicle, RCMP said.

On Aug 2, several items directly linked to the suspects were found on shoreline, 9km along the Nelson River. RCMP Underwater Recovery Team did not find additional items. Roadblock on PR 290 has been removed, but officers remain in the Gillam area. #rcmpmb https://t.co/eHFxdLg6UM

Schmegelsky and McLeod are charged with second-degree murder in the death of University of British Columbia lecturer Leonard Dyck, whose body was found last month in northern B.C.

Police also consider the men suspects in the shooting of Australian Lucas Fowler and his American girlfriend Chynna Deese, who were found dead on the Alaska Highway near Liard Hot Springs, B.C.

Mounties announced last week that the massive manhunt would be scaled down in Manitoba's immense northern landscape after it yielded no signs of the two suspects.

The search was supported by specialized military aircraft and RCMP also used all-terrain vehicles, drones, helicopters and planes. Officers had searched more than 11,000 square kilometres of wilderness and canvassed more than 500 homes before resources were pulled back.

RCMP said on the weekend that a damaged aluminum boat was also discovered in the Gillam area. Despite an underwater search by its dive team, officers said nothing else was found.

Nathan Neckoway, a councillor for Tataskweyak Cree Nation, about 87 kilometres southwest of Gillam, posted online that he believed the boat belonged to a family member. He said it was already damaged and he doubts whether anyone could have used it.

RCMP said Tuesday that officers remain in the area.

Investigators have said it's possible the suspects are dead or inadvertently received a ride out of the region.