Why this Mariachi singer was walking through a snowstorm in Gastown

You may have been wondering why a Mariachi singer was trudging through a snowstorm on the streets of Gastown on Wednesday… We found out.
0
Jan 18, 2020 4:16 PM By: Elisia Seeber 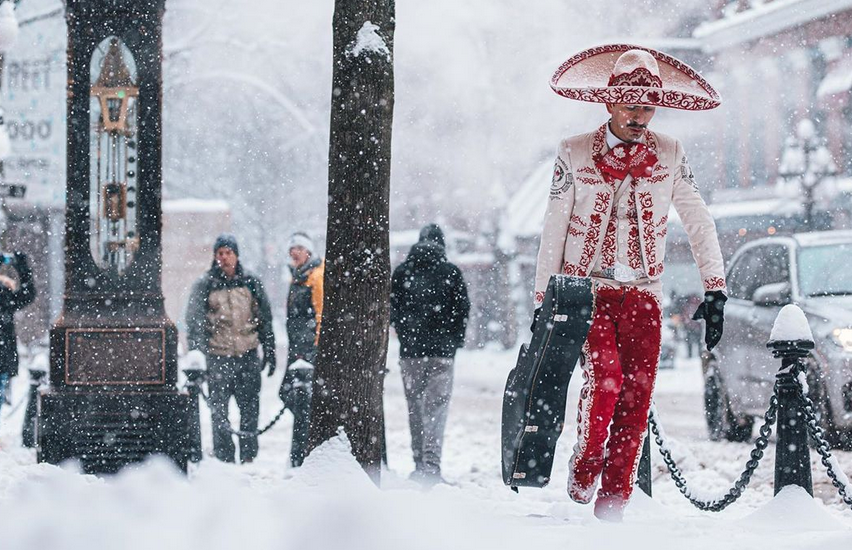 A Vancouver Mariachi singer has explained why he was trudging through a snowstorm in Gastown earlier this week, after a photo of him wearing his colourful charro suit and holding his guitar in the snow went viral on social media.

While most people were sheltering indoors away from the wintery blast on Wednesday, Jan. 15, Alex Alegria, founder and director of Mariachi Los Dorados, said his band was shooting a music video.

Vancouver photographer Banana Cam Photo took the photo and shared it on Instagram with the caption, "Rain, shine and even snow...Mariachi will prevail." It got an incredible amount of attention and has since been shared worldwide.

“The photographer was in the right place at the right time and to be honest I didn't even notice, until later when I saw the photo everywhere,” Alegria said.

Alegria, who has lived in Canada for the past 23 years, said the 12-member band, which plays traditional Mexican music, had ordered a commemorative Canadian themed outfit with a maple leaf to celebrate its 17th year as a group.

“In order to promote the new uniform, and the band, we were shooting a music video in Gastown … and the storm came in the middle of it,” he said.

Alegria said the photo had been shared more than 50,000 times across social media — reaching India, Australia, Germany, England and all of Latin America— and he had been featured on all national TV networks in Mexico.

“I have been getting calls and lots of interviews regarding that photo and the history behind the band,” Alegria said.

The band, previously known as Mariachi Romántico, was established in 2003 with the goal of bringing Mexico's traditional music to Canada. Alegria said the new name came from General Francisco Villa's army “Los Dorados” which had members from North America.

The 43-year-old, who has been a Mariachi singer for 20 years now, said he loved keeping the traditional music alive and it was becoming more and more popular in Vancouver.

“People love our music and we have done shows all across Canada from B.C. to Ontario and Yukon. As well as California, Las Vegas and seven states in Mexico," he said.

“One of the missions of Mariachi Los Dorados is to maintain and promote the beauty of Mexico through its traditional and uplifting music.”

Alegria said he was “extremely humble and thankful for the response” to the photo.

He encouraged people to take the opportunity to listen to the “beautiful music,” to follow Mariachi Los Dorados on social media and to hear the band play at one of its upcoming shows.