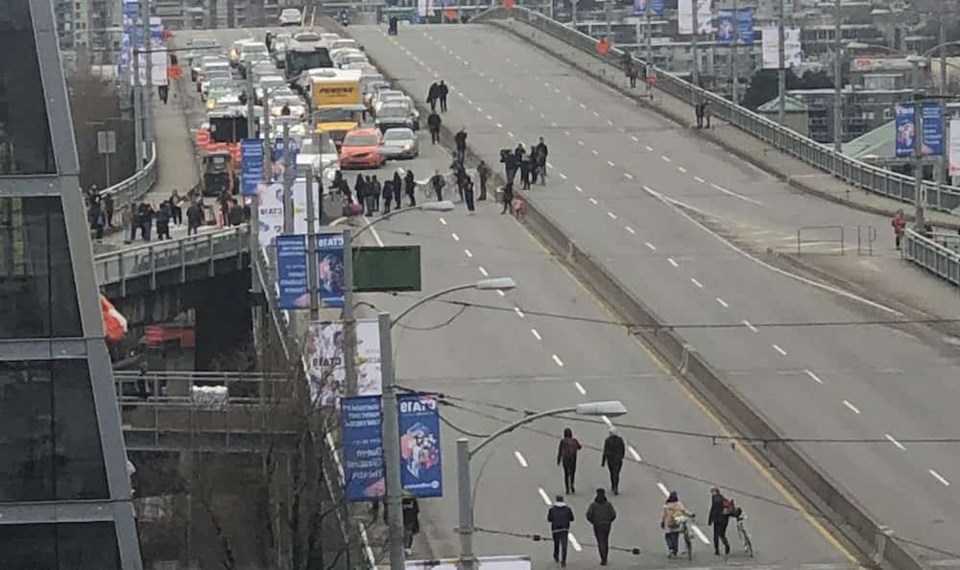 Vancouver police have also stated that the protest is currently blocking the Granville Street Bridge in both directions. As such, drivers are advised to avoid the area.

#VanTraffic: Protestors have shut down the Granville Street Bridge to traffic in both directions. Drivers are advised to avoid the area. pic.twitter.com/Tz7pXgIVom

just walked by another pipeline protest on Granville St. Vancouver, Native Women in Protest in consolidation shouting NO PIPELINE ON NATIVE LAND. I agree with them

TransLink has also advised commuters of a number of detours due to the march. Acording to the latest alert, the 4 UBC/ Powell, 7 Dunbar/Nanaimo Station, 10 Downtown/Granville, 14 UBC/Hastings, 16 Arbutus/29th Ave Station and 50 Waterfront Station/False Creek service are on detour due to a march blocking the Granville Bridge.

Delays up to 30 minutes have been reported.

10 Granville detour 11:45am. Regular route to Hastings and Granville, then Hastings, Howe, Granville Bridge, resume regular route due to march.

@BissonYVR had Tweeted that Dunsmuir street is closed at Seymour and that all traffic is turing north on Seymour.

Another day in #Vancouver, another protest blocking streets. Dunsmuir closed at Seymour downtown. All traffic must turn North on Seymour. Avoid Dunsmuir. This is getting out of hand. #VanPoli #bcpoli pic.twitter.com/UsXn9eAO7m

Protest actually blocking Granville Street, between Georgia and Dunsmuir. Avoid the area if you are a bus commuter. #Vancouver #Protest #vanpoli #bcpoli pic.twitter.com/MegAzYuqt6

“Our passion for freedom is stronger than your prisons!” Protest in solidarity with #Wetsuweten winding its way through downtown #Vancouver with @VancouverPD escort. #bcpoli #cdnpoli pic.twitter.com/3GRIR1FmBB

Heard chanting from office window— peeked outside and see the #Wetsuweten supporters are blocking Granville bridge and have taken intersection at Drake and Granville. pic.twitter.com/LLURMqN10h

The protestors are supporting First Nations opponents to a natural gas pipeline in northern B.C. Here is what some of them had to say at yesterday's protest.