North Vancouver’s Norm Lee was in his Upper Lynn Valley backyard Tuesday afternoon when he spotted a blur of fur darting by. Lee had to do a double take.
0
Mar 19, 2019 4:51 PM By: Brent Richter

It was like a scene right out of Saturday morning cartoons.

North Vancouver’s Norm Lee was in his Upper Lynn Valley backyard Tuesday afternoon when he spotted a blur of fur darting by. Lee had to do a double take.

“First I thought it was a cougar chasing a dog or something but then they stopped,” he said. “I looked and I thought, that’s not a cougar, it’s a cat. And that’s not a dog, it’s a coyote.”

But this kitty was no pussycat.

Lee filmed the scene as the orange tabby stared down the clearly intimidated coyote.

“What you see in the video is the coyote trying to pass the cat and go back the other way but the cat wouldn’t let him go,” he said. “It was like, wow, this actually happens? I thought for sure it would be the other way around.”

Eventually, the coyote bolted in the other direction, Lee said.

When he posted the pictures and video to his own social media, Lee included a picture of Wile E. Coyote, the classic Warner Bros. cartoon character with a habit of having his predatory plans backfire on him.

Ironically, Lee was just about to head out for a bike ride in hopes he’d come across some wildlife to photograph.

“Oddly enough, my camera’s always in reach, even at home,” he said. 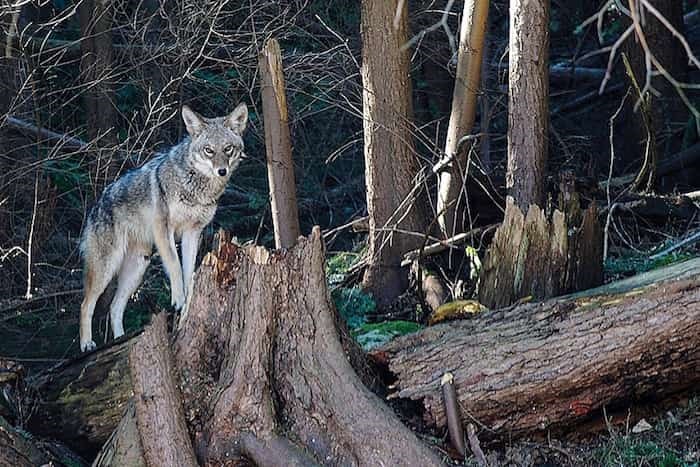