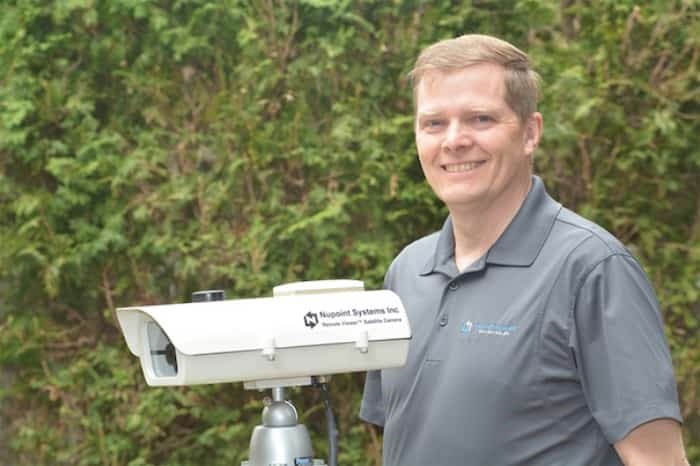 A made in Delta product recently helped save the life of an Edmonton hiker.

Nupoint Systems has developed a unique satellite camera that monitors remote environments. It takes regular photographs of remote areas and sends them back via satellite networks. Hundreds of these systems are deployed across remote areas, where there is no cellular coverage, to monitor wildfires, snow and ice conditions, wildlife, natural resource infrastructure and more.

The hiker, accompanied by his dog, left Pinto Lake outside of Lake Louise on March 13 on what he expected to be a four-day hike. When he realized he was in trouble, he noticed the satellite camera and hoped it would transmit a message to a rescue team.

The distress signal, a photograph of an SOS stomped into the snow, was transmitted first to Alberta Agriculture and Forestry. As soon as it was recognized as a call for help on March 18, it was passed to the RCMP. Rocky Mountain House Search and Rescue and RCMP K Division air services personnel were deployed and found the man and his dog in good health. Both were airlifted back to the trailhead staging area.

“We developed our Remote Viewer satellite camera systems just a few years ago, and we’re selling them across North America to environmentalists, government bodies, natural resource operators, law enforcement and owners of remote buildings,” said Wayne Carlson, president and CEO of Nupoint Systems. “We’re delighted that our technology was instrumental in saving the life of this Edmonton hiker and his dog.”

Carlson said what happened in this case is completely out of the normal application.

“That camera is there to monitor the environmental conditions at Pinto Lake. I believe this was an extremely fortuitous situation for the hiker,” he said. “He must have noticed the camera and stamped out the SOS with the hope that the camera was operational.”

Nupoint is a small home-based office with a contract manufacturer in Langley that opened in 2011.

Nupoint's core technology is rooted in satellite data transmissions using minimal power. Its engineers developed a satellite transceiver (basically a highly programmable modem) that uses little power and can be connected to sensors to transmit the data from remote areas.

In 2014, the Alberta Ministry of Environment contacted Nupoint to see if it could connect a camera to the transceiver to also receive scheduled images. Nupoint's engineers were able to do this and a new product was born.

Nupoint’s core technology product is sold to customers that just need to transmit sensor data with no images. Customers for this product are pipeline maintenance, highway maintenance trucks and equipment, remote sensors for things like geotechnical equipment or air/water data loggers.

Nupoint’s cameras are deployed all across Canada with government agencies that monitor environmental conditions.

To learn more about the company visit here.