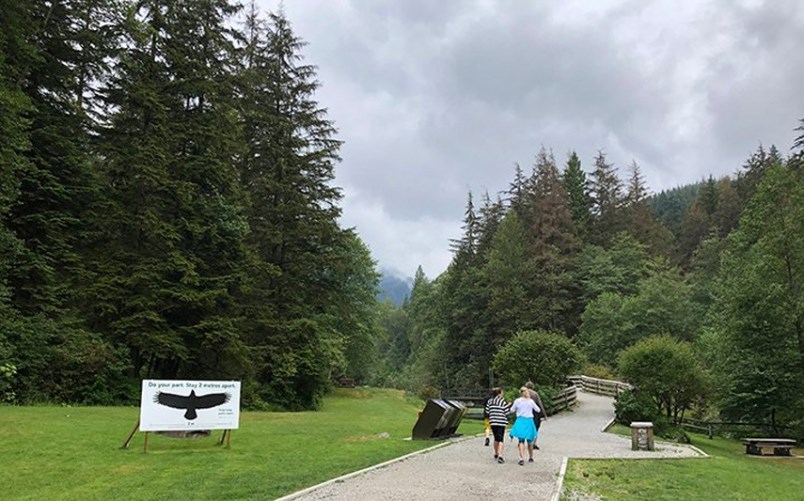 “The message that we've received loud and clear through the pandemic from our park visitors is how important parks are for their physical and mental health during this challenging time, and we're seeing that reflected in an increase in park visitation,” said Richard Wallis, acting west area division manager for Metro parks. “We're looking to address some of the parking pressures that we're seeing at some of the North Shore parks.”

There are some rules for the new shuttle: First come, first serve. Two-leggeds only – no dogs or bikes allowed. Mandatory facemasks, you betcha.

During its first weekend in operation, there wasn’t a lot of take-up for the shuttle, Wallis said, but the hope is that more people make use of it as word spreads.

Capilano River Regional Park typically draws in about 900,000 visitors per year, and has seen a 21 per cent spike in demand in 2020, although visits there tend to be shorter so there is more turnover at nearby parking lots, Wallis said.

Across the regional parks system, visits are up about 38 per cent over last year.

While Metro Vancouver has been looking at different ways of getting folks onto the trails, the province is now curbing the number of people that may visit Mount Seymour and Cypress provincial parks.

Starting on July 27, the BC Parks began requiring users to get a free online pass before arriving at the trailheads in six of the busiest provincial parks in the province.

On the Saturday and Sunday of the B.C. Day long weekend, all 2,100 passes for the North Shore provincial park trails had been claimed by 10 a.m., according to the ministry.

Under the Park Act, users caught on the trails without the right pass can face a $115-fine, however the ministry says it will focus on education rather than enforcement, and so far, they have had no issues with compliance.

The pilot project has a $900,000 budget to cover new signage, infrastructure and 23 new staffers, according to the ministry.

“Visitor safety is our priority and day-use passes allow us to safely manage the amount of people in busy parks to prevent crowding on trails, provide opportunities for physical distancing, and protect the park environment from the impacts of overuse, all of which result in a much more enjoyable experience,” a statement from the ministry read.