You can get a whopping $1 million fine for entering this forbidden B.C. cave

Caving can be very dangerous - from falling rocks to flooding - and people can get a huge fine for entering this forbidden B.C. cave.
Dec 19, 2018 2:59 PM By: Elana Shepert

It may be tempting to play Indiana Jones and go adventuring through B.C.'s most awe-inspiring caverns - but you may want to think twice before you do so.

For one, caving is extremely dangerous - from falling rocks to flooding, extreme temperature to sudden drops - the activity comes with a litany of risks. What's more, some of the province's most tempting caves are strictly prohibited to the public. 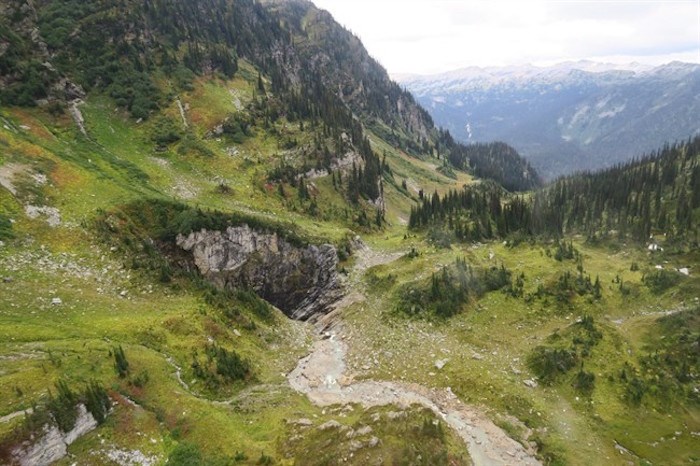 A newly discovered cave in a remote valley in British Columbia’s Wells Gray Provincial Park just might be the country’s largest such feature. The entrance to the cave, nicknamed “Sarlacc’s Pit” by the helicopter crew who discovered it, is seen in an undated handout photo. THE CANADIAN PRESS/HO-Ministry of Environment and Climate Change, Catherine Hickson

The recently discovered cave in Wells Gray Provincial Park might be the country’s largest. The entrance pit to the cave is about 100 metres long and 60 metres wide, and while its depth is hard to measure because of the mist from a waterfall, initial examinations show it is at least 135 metres deep.

With that in mind, BC Parks announced that both the cave as well as the surrounding area are closed to public access. Furthermore, it states that under Section 17 of the Park Act, Section 28: "A person who contravenes any provision of this Act commits an offence and is liable to a fine of up to $1,000,000 or a term of imprisonment of not more than one year or both."

Yes, you read that correctly - step one foot near that cave and you could get slapped with a staggering $1,000,000 fine and a year behind bars.

The government has determined that the area could be hazardous and that it may also contain fragile cultural heritage values. As a result, the public is completely banned from accessing the area.