Canada just reached an 11th-hour NAFTA deal with the U.S. and Mexico

Minister of Finance Bill Morneau arrives for an emergency cabinet meeting on the NAFTA negotiations in Ottawa on Sunday, Sept. 30, 2018.
0
Sep 30, 2018 7:31 PM By: The Canadian Press 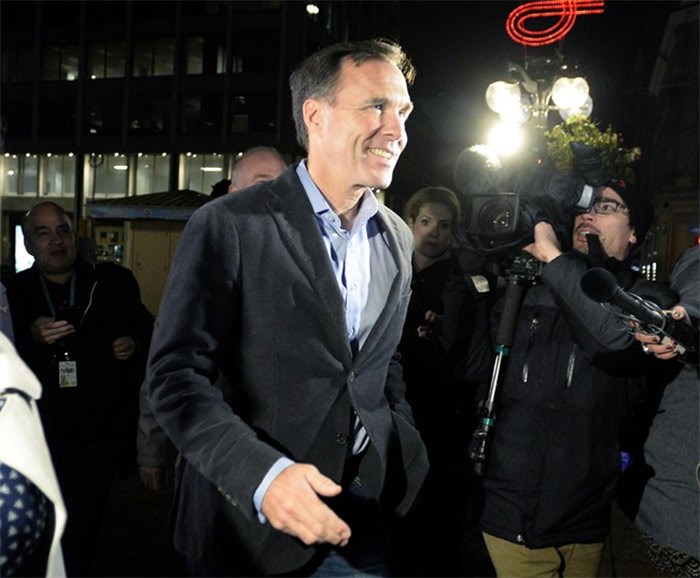 Minister of Finance Bill Morneau arrives for an emergency cabinet meeting on the NAFTA negotiations in Ottawa on Sunday, Sept. 30, 2018. Federal cabinet ministers were being summoned to a late-night meeting Sunday with the prime minister amid signs that the fall finale to Canada’s long-running NAFTA drama may finally be at hand — with the famous unpredictability of the man in the White House giving everyone cause for caution. THE CANADIAN PRESS/Justin Tang

Sources tell The Canadian Press an 11th-hour NAFTA deal has been reached that allows Canada to rejoin the trilateral trade pact.

Insiders got wind of a breakthrough after 14 months of tumultuous talks and just hours before U.S. and Mexican trade authorities were set to publish their own trade agreement without Canada as a signatory.

Federal cabinet ministers were summoned to a late Sunday meeting at the prime minister's office near Parliament Hill, and the White House called its own late-night trade briefing.

Meantime, congratulations were being offered among key stakeholders who have been on the edge of their seats waiting to see if Canada and the United States would find common ground.

An agreement on how to treat the auto sector, reached this summer between the United States and Mexico, was central to a revamped NAFTA going ahead.

But the U.S. and Canada had trouble dealing with other areas in the pact, including Canada's dairy industry, its insistence on a strong dispute settlement mechanism and concerns about intellectual property and culture.

Foreign Affairs Minister Chrystia Freeland and U.S. Ambassador David MacNaughton had spent the day in Ottawa taking part in an aggressive, long-distance, last-minute push to get Canada into the trilateral free trade deal ahead of a key congressional deadline.

Central to the discussions Sunday was an effort to secure some sort of assurance that would allow Canada to avoid the dreaded Section 232 tariffs on steel, aluminum and auto exports, which U.S. President Donald Trump has either threatened or already imposed on national security grounds.

Canada had been offering the Americans better access to its protected dairy market in the hopes of winning American concessions on dispute settlement.

Prime Minister Justin Trudeau has promised repeatedly to keep the country's supply management system intact, despite pressure from Trump. The issue has also figured prominently in Quebec, where voters go to the polls in a provincial election on Monday.