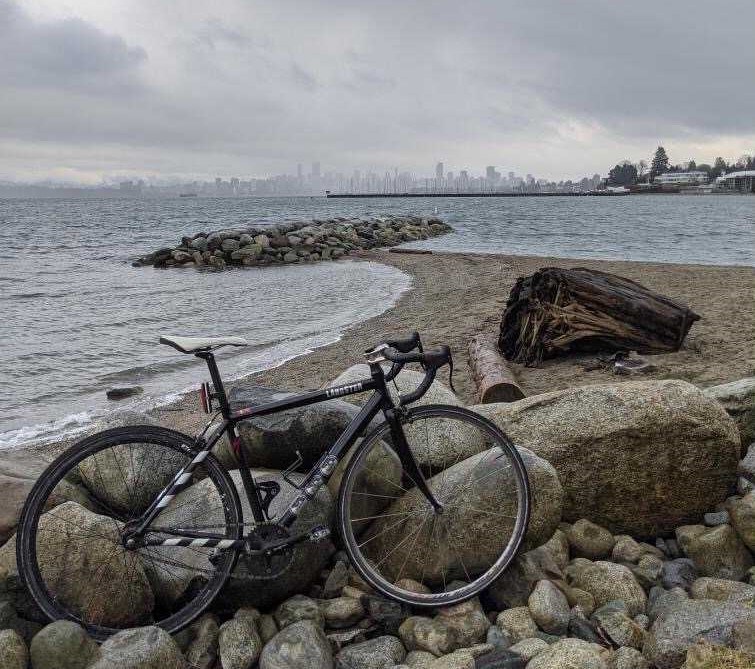 Tyrone Siglos stars in a lot of photos from around Vancouver as it poses for bike tag pics.Tyrone Siglos

Part scavenger hunt, part hide-and-seek and part race, bike tag is a relatively new activity in Vancouver with a growing roster of participants.

Ken Eucker describes it a little more succinctly, calling it a "mystery photo tag game." He's a software engineer from Portland and one of the people behind biketag.org, a site built to facilitate the games in 2018.

Bike tag is fairly simple. A photo is posted online of a bike in a specific spot. You figure out where that is, ride your bike to that spot and take a photo of your bike there.

In Vancouver, the current game has seen over 200 spots found.

They've set up games for Abbotsford and the Cowichan Valley, but those haven't gotten started. While he keeps the site alive, Eucker doesn't run the games in any given city.

WHAT IS IT IN VANCOUVER?

In Vancouver Tyrone Siglos is one of the local leaders.

"I think of it as a tag like when someone tags a wall," he explains. "You're tagging a spot; someone will tag a spot with their bike."

He says the game helps get people out and about, exploring the city with a goal.

"That's really kind of the gist of it, it's pretty straightforward," he says. "It's easy to play, but it does take a bit of recognizing spots and solving clues."

Some spots are iconic and easy to find, others are more difficult and require deciphering a clue, which also may be easy or hard. Usually, the spots are close together, since they have to be done on the same ride.

"It's an awesome way to bike around during the pandemic," Siglos says.

Locally the game has seen an uptick during the pandemic with eight or more tags in a day (if it's a nice day). Others there may only be one. While there is a leader board keeping track of who has the most finds, Siglos adds there are lots of people who just go and find places occasionally. Some also use the archive as a way to find out about new spots to cycle.

"I thought I had seen everything, but I'm quickly learning there are so many little nooks around the city," he says. "It's a good way to get that exploration bug out."

He adds it's a good way to see all the neat things around the city, in particular public art and murals which may not all be as iconic as others. Odd architecture is also a highlight.

With a massive cycling culture in Vancouver, Siglos says bike tag is a good game to unify a lot of different cliques as the game doesn't require a specific type of bike, just the act of cycling (along with a camera and internet connection).

"It's not really that competitive aspect, it's more about seeing what's in your community," Siglos says.

WHAT IS ITS HISTORY AND FUTURE?

While Eucker helped set up the current system for games in Vancouver, Portland, Vienna and others, he says the game's history stretches back a couple of decades.

More recently games were started in 2007 in Minneapolis and London (the one in the UK) with essentially the same system, but using Reddit, which was clunky. In 2018 biketag.org was set up.

"Our mission is to promote and support the game and make it easy for everyone to play," Eucker says.

The site and community also make it possible for independent communities to influence each other; for example, Siglos's efforts on Instagram are used as an example for other cities.

Overall the bike tag community is run on enthusiasm and volunteers, he adds. Where it grows from here is up to those who participate, he adds. There are just two central tenets: exploration and getting active.

"The more it grows, the more it opens the city to casual biking," he says.

These updated cycling maps can help you get around Metro Vancouver on two wheels
Feb 24, 2021 11:36 AM
Comments