Despite assurances family reunifications were allowed, Air Canada would not let the Scotsman depart London for Vancouver
Jun 16, 2020 8:35 AM By: Chris Campbell 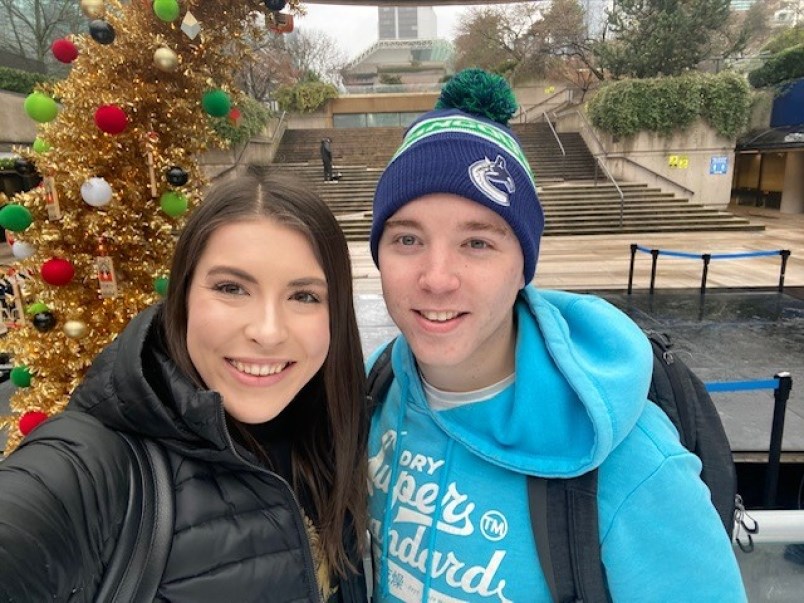 New Westminster resident Paige Munro (left) and husband Kieran during his recent visit to the city over Christmas. Submitted photo

When Paige Munro got married, she did it with the understanding she wouldn’t see her husband Kieran for long periods of time.

That’s what happens when you fall in love with a Scotsman who still has to serve two more years in Edinburgh as a county-level councillor.

But she didn’t expect to be away from him for this long.

The New Westminster newlywed last saw Kieran when he visited in January. He was set to fly back to her on June 8 – a much-anticipated reunion – when an Air Canada ticket agent refused him entry to a flight leaving from Heathrow Airport in London, England.

“It’s unbelievable,” Paige told the NOW on Monday, explaining that Kieran was told his travel was “non-essential.”

“The Canadian Government made it clear that reunification with an immediate family member is a legitimate reason for travel and, therefore, the Air Canada agent had no basis for denying his entry onto the flight,” Paige said. “As he is my legal immediate family member, he is exempt from the COVID-19 travel restrictions.”

Paige says her husband had the proper documentation, including his marriage certificate.

Kieran had already paid to take a train to London, the only place he could fly to Canada from, but after being denied his flight, had to buy another ticket back to Edinburgh.

Paige has now filed a complaint with the Canadian Air Transport Security Authority. She has also complained to Air Canada, asking to be refunded for the flight.

In documents supplied to the NOW, Air Canada does not refer specifically to her case, but simply says that all travellers must have proper documentation and that it won’t refund their money.

“We sympathize with your situation, however, if a passenger is refused travel, the usual fare rules apply,” Air Canada wrote. “Therefore, in accordance with the fare rules … regretfully, we are unable to offer compensation as requested.”

Paige reiterated to the Record that Kieran had the proper documents, as the couple did meticulous research about what he would need.

“I filed a complaint directly with Air Canada, and they just kept insisting that my husband did not have the proper documentation for travel when he, in fact, did. I followed up again on the complaint and they refused to connect me with a supervisor or manager to handle my problem. It’s obvious from the back and forth that Air Canada just doesn’t care about resolving this,” Paige said.

The pair met while Paige was doing her master’s degree at the University of Edinburgh.

“We’re still newlyweds,” she said. “I just can’t believe this.”