A Lynn Valley woman says it’s time for the District of North Vancouver to extinguish the butts in Lynn Canyon and all other municipal parks.
0
Aug 17, 2019 3:36 PM By: Brent Richter

A Lynn Valley woman says it’s time for the District of North Vancouver to extinguish the butts in Lynn Canyon and all other municipal parks.

Matina Spiropoulos bikes or hikes in the municipal park weekly but was astonished to learn from a park ranger recently that lighting up is still (mostly) legal in the densely wooded recreation area. 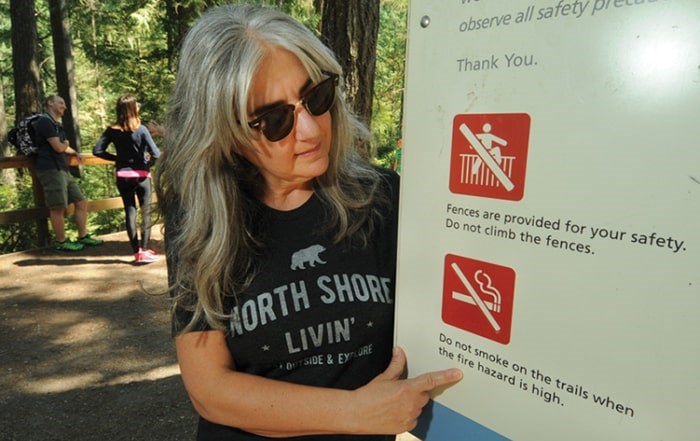 The district bans smoking within six metres of children’s playgrounds, playing fields, swimming beaches, food concessions, or picnic areas and in any part of a park where there is a public event. And when the fire danger rating reaches “high” or “extreme,” a complete fire ban – including smoking – is pronounced by the fire chief, to mitigate the risk of fire, according to district spokeswoman Courtenay Rannard.

“If you want to smoke in your house or in your backyard, I can’t stop you because that’s your property. But if you’re out in a park, then why should you be smoking, polluting my air? Why should you be polluting the ground?” she asked. “That should be it. Not sometimes yes, sometimes no. Always no.”

Beyond the noxious fumes and litter, Spiropoulos said too many people are in the habit of flicking their butt when it’s finished and letting it smoulder, which is dangerous regardless of the forest fire danger rating.

“It’s not like the forest is cement. It’s flammable,” she said.

Council last reviewed the parks bylaw in 2018 but opted to continue allowing smoking in parks, with the noted exceptions. In June this year, council directed staff to take a second look. Spiropoulos has already written to the mayor and council to raise the matter but, she said, they need to see a critical mass of people telling them it’s time to ban the butts for good.

“Now is the time to write because they’re looking at amendments,” she said.

If she’s successful in her campaign, Spiropoulos said she would expect to see No Smoking signs posted at every park entrance, as well as enforcement. But, she added, since so many people lighting up in the woods are visitors, the education campaign would have to extend to the province’s tourism marketing as well.

Under the bylaw, smoking where prohibited in a park carries a $25-fine.

Metro Vancouver, which owns Lynn Headwaters Regional Park and the Lower Seymour Conservation Reserve, bans smoking in all of its parks.

The City of North Vancouver currently bans smoking within 7.5 metres of playgrounds and picnic areas in parks, but staff are expected to report back on the potential for an outright prohibition of smoking in “all parks and plazas and on multi-use pathways.”

The City of Vancouver and Burnaby both do not allow smoking in parks, trails or green spaces.