There’s at least two things we’ve learned we need now more than ever during the last many months: that's health-care workers to mind our bodies and art to replenish the soul.
Jul 10, 2020 6:18 PM By: Ben Bengtson 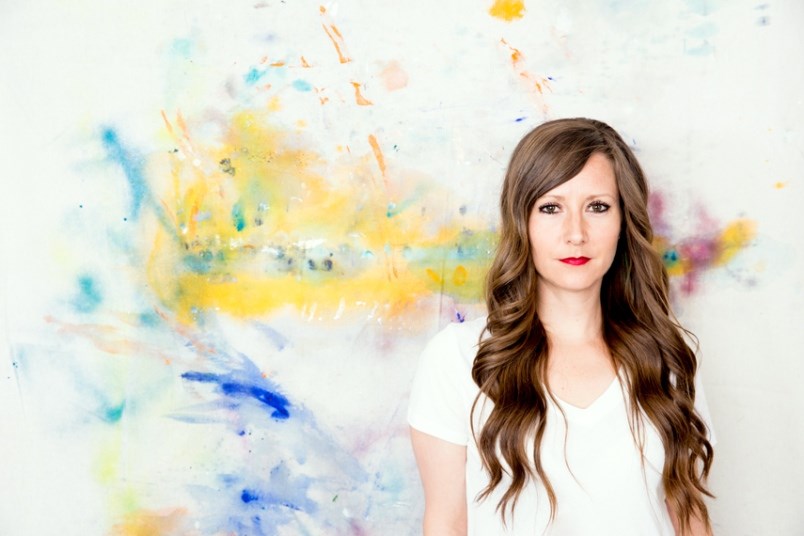 Abstract painter and North Vancouver resident Donna Giraud poses in her Vancouver studio. Her second show, Together Is Always Better, is inspired by our collective time living in quarantine. photo Charles Zuckermann

There’s at least two things we’ve learned we need now more than ever during the last many months: that's health-care workers to mind our bodies and art to replenish the soul.

Navigating our way through COVID-19, the worst public health crisis in recent memory, would be unthinkable without the throngs of nurses, doctors, care aides and other health-care professionals leading the charge. And with many of us having spent the better part of the year holed up at home, neglecting in-person social contact and staying far enough away from the office, we’ve turned to the arts – to entertainment, to culture – as a necessary salve to get us through the long days.

She started her nursing career in 2005, spending the next 14 years at busy St. Paul’s Hospital in Vancouver. For the first five years she was a bedside nurse, tending to the needs of patients experiencing all manner of different health crises, before becoming a head nurse in the hospital’s acute medicine ward.

“It was a lot,” she says, offering her solidarity with the nurses and other health-care workers who’ve spent months managing the pandemic right there on the front lines. “As a nurse, you’re a giver.”

But even before she started her nursing career, there were other parts of herself that Giraud felt compelled to give.

In nursing school, she would play around with the paintbrush in order to burn off some creative energy and steam after a long day.

“It turned out people were interested in what I was doing and then I started doing shows, started selling,” she says.

She was drawn to the abstract – paintings that don’t exactly say what they are, but hint at meaning by conjuring a mood, a feeling, a memory through non-linear textures, shapes and colours.

“My favourite thing about it is when somebody does say the actual emotion or the feeling or the theme that I intended on – for me to tell a story through my art that people can then interpret – I absolutely love it,” she says.

Three years ago Giraud decided to take a leap of faith and give herself over to the arts completely.

“I’d given so much of myself with the nursing for so many years,” she says.

She now co-runs an arts studio in Yaletown and her work has been featured in art shows around the world.

As fate would have it, her plans for her first official solo show in Vancouver were disrupted when everything shut down back in March due to the spread of novel coronavirus. But like any creatively-inclined person, she find away around it.

Her solo show, Lost and Found, which touched on the prescient themes of isolation and loss coupled with trying to figure things out, couldn’t be experienced in person due to quarantine restrictions – but Giraud used video footage and her website’s chat function to put on an interactive, virtual show.

Describing her work as large-scale abstract textural work, which is particularly influenced by the West Coast’s surrounding nature, Giraud has taken inspiration from our collective time in lockdown for her upcoming show.

In Together Is Always Better Giraud has drawn on the notion that COVID-19 is one thing we now all have in common. From viral images of people in Italy singing to one another from their patios to the sounds of people cheering and banging pots and pans during the nightly celebration of front-line workers, she’s sought to pay homage to this moment in history through her paintings.

“We all experienced this really horrible thing, but out of that I saw so many beautiful moments,” she says. “I just thought it was so poignant.”

Due to British Columbia’s phased reopening, hopefully small groups of people will be able to attend the show in-person this time, says Giraud, though she notes that after the accidental success of her first virtual show she’ll likely offer some kind of online component going forward as well.

“Really all I want you to do is for you to feel something when you’re in front of my work. Usually it’s feelings of hope, kindness, positivity – there’s always a positive twist.”

The show is slated for this September. Giraud will be inviting two people at a time to enter The Space gallery for the appointment-only show. Visit Giraud’s website, donnagiraudart.com, any time after Aug. 12 to sign up for a showing.