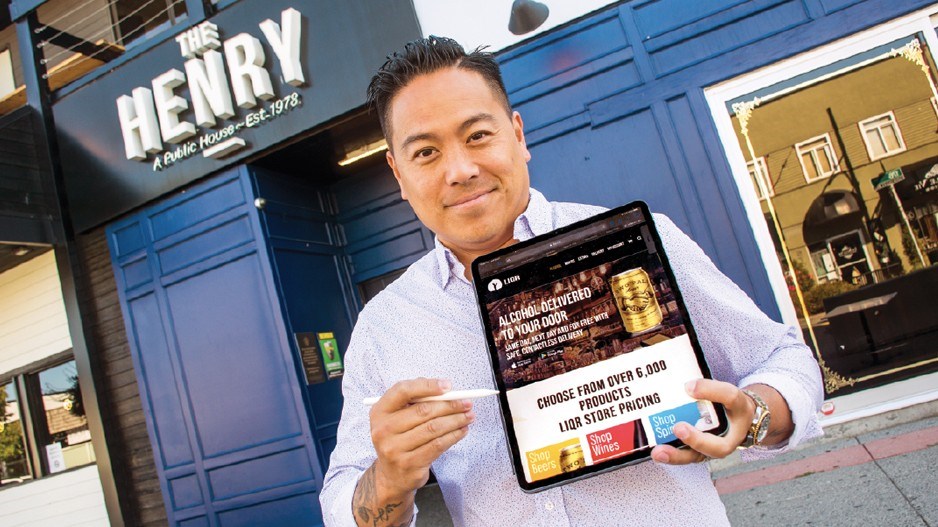 Joseph Richard Group principal Ryan Moreno recently launched an alcohol-delivery app that has no minimum order or fees. Here he is standing in front of one of his pubs |  Chung Chow

The COVID-19 pandemic has shaken up the liquor delivery business in Metro Vancouver, opening the door – at least temporarily – for restaurants to deliver alcohol with meals, for consumers to receive alcohol bought from private retailers through meal-delivery apps and for a diverse range of companies to enter the fray.

One player, the Joseph Richard Group (JRG), recently spent more than $100,000 to build and launch an app, called LIQR, which enables customers to buy alcohol for next-day delivery with no fees.

Owner Ryan Moreno told BIV that he anticipates providing same-day deliveries soon across Metro Vancouver, and that business has been brisk thanks to his strategy to match and sometimes beat the prices offered at government liquor stores.

Moreno is eyeing cross-country expansion to build a larger network and profit from economies of scale.

Many liquor retailers in B.C. do not have e-commerce websites, much less apps.

One of the pioneers in establishing an e-commerce website, Marquis Wine Cellars owner John Clerides, told BIV that he does not see the value in building an app.

“The cost of an app is fairly expensive,” he said. “Our website is doing just fine.”

The B.C. government recently granted Clerides’ wine store permission to sell beer and spirits, and he is working through the bureaucracy to be able to stock those products soon.

Clerides' store provides same-day delivery within Vancouver as long as orders are made by 2 p.m., but there are delivery fees unless the order is $200 before tax. Other wine stores, such as Liberty Wine Merchants, also have $200 minimum orders for free delivery.

The largest liquor-delivery app in North America is likely Boston-based Drisly, which is in more than 100 markets across the continent. Company representatives said in 2018 that it planned to operate in Vancouver, but its app does not yet function in the city.

One newcomer to the alcohol-delivery game is the e-commerce website Legends Haul, which has long partnered with a range of local businesses to deliver groceries and meals. It partnered this summer with Coquitlam’s Austin Station Liquor Store to deliver across the Lower Mainland. The deliveries come with a $4.99 fee.

Other ventures do business as third-party operators that deliver alcohol for added fees. Meal-delivery apps, such as Uber Eats, have also recently started delivering products bought at private liquor stores, and they charge extra fees.

What makes JRG’s fee-free app particularly valuable for the company is that it can benefit from vertical integration. The company owns the Stanley Park Brewing Restaurant and Brewpub and manages operations at Glass House Estate Winery. It also separately has contracted a brewery to make its Two Pals beer. The app, therefore, helps the company sell its own products.

Despite JRG being known primarily for owning more than a dozen restaurants and pubs, its app is linked to the company’s three liquor store licences.

Those licences allow the company to deliver alcohol without food, which restaurants and pubs are required to do, as well as to buy alcohol at wholesale prices.

What’s the deal with Vancouver council’s obsession with booze during a pandemic?
Jun 5, 2020 10:39 AM

More booze talk on tap at Vancouver council next week
Jun 18, 2020 2:00 PM
Comments
We welcome your feedback and encourage you to share your thoughts. We ask that you be respectful of others and their points of view, refrain from personal attacks and stay on topic. To learn about our commenting policies and how we moderate, please read our Community Guidelines.