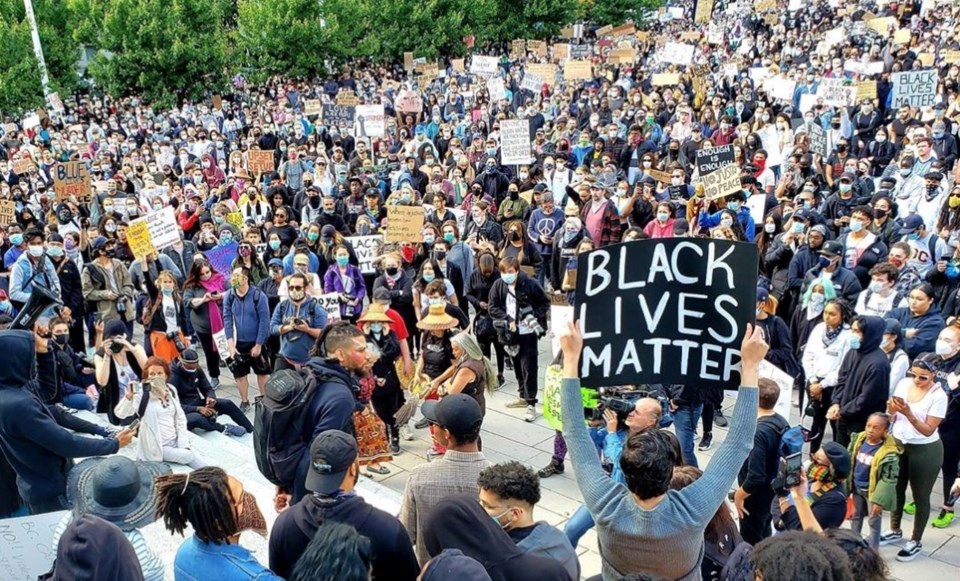 Protesters gathered Sunday evening in downtown Vancouver to speak up about racial injustice and the recent death of George Floyd at the hands of a Minneapolis police officer.

Additionally, Canadians have been protesting the recent death of Regis Korchinski-Paquet, a black Toronto woman whose mother says the 29-year-old woman was fatally pushed off a balcony by authorities.

An estimated 3,500 people took part in the protest, held outside the Vancouver Art Gallery.

Vancouver's gathering was peaceful, with many attendees wearing face masks and at times attempting some degree of physical distancing. Reports indicate some masks were being made available to attendees who did not have one.

The Vancouver chapter of Black Lives Matter said they did not organize the event, but they "stand in solidarity, with deep gratitude." They identified Jacob Callender-Prasad as the organizer, who called for the protest on social media, saying:

"We need a call to arms it’s time we stand up and unite and support our brothers and sister in the states we can’t sit by and watch more of our people continue to die to cops who don’t deserve to hold the badge and serve and protect the law cannot should not and must not pick and choose who they want to serve and protect."

The event was also organized by the group Black Vancouver, who hopes the protest could serve as a powerful example of a way to create change.

One highlight of the protest included a minute of silence, in which protesters held their fists raised in solidarity.

TY #Vancouver for exercising your right to lawful #PeacefulDemonstration at the #VAG! #ProudCanadian

TY to our #VPD officers for your professionalism & committment to #CommunityWellbeing! #ProudChief

Vancouver Police say no arrests were made Sunday in relation to the protest.

Here are some images from Sunday's protest in Vancouver: