Vancouverites are taking to the streets to speak out against racism amidst deaths of George Floyd, Regis Korchinski-Paquet

While a rally protesting racism and police brutality is scheduled to take place in Vancouver on Sunday, the local Black Lives Matter chapter says it has “respectfully declined to participate” as members “do not feel that we can ensure the safety of our community in public protest at this time.”
May 30, 2020 9:18 PM By: Megan Lalonde 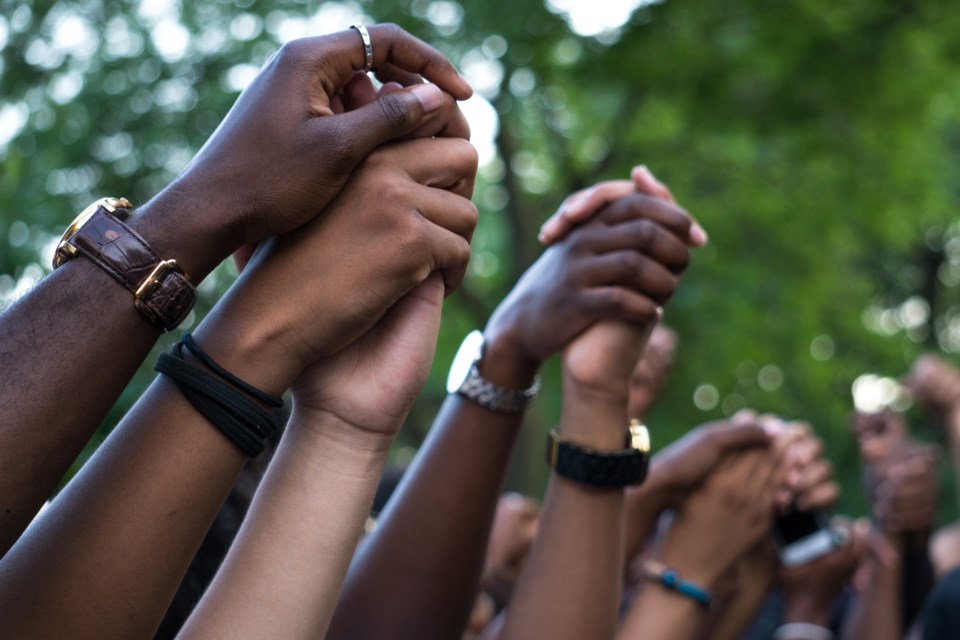 This photo was taken in Montreal, on July 13, 2016. On the hottest day of the summer (37 C), hundreds of protesters gathered at Nelson Mandela Park for a Black Lives Matter rally, in solidarity to similar protests in the United States, and to condemn the racial profiling and police brutality in Montreal. Rallies and marches are taking place across North America this weekend to protest the same causes. Photo: Getty Images

As outrage over the death of George Floyd in Minneapolis continues to be felt across the continent, protestors are taking to the streets in cities across North America to make their voices heard.

In Vancouver, police tweeted just before 7 p.m. on Saturday that “Protestors have taken over the intersection of Main and Hastings, and traffic is blocked in all directions.”

Videos posted to social media show around 100 people, most of whom wore masks and appeared to leave space between themselves and other protestors, marching through downtown Vancouver carrying handwritten signs and chanting “Black lives matter.”

However, another more formal protest organized by Jacob Callender (@boy_pollo on Instagram), backed by @blackvancouver, is set to take place in Vancouver on Sunday evening, May 31.

Callender outlined the details of Sunday's peaceful protest in an IGTV video posted on Saturday afternoon. He said he's currently expecting to see between 1,000 and 2,000 people show up.

The local anti-racism rallies come as a response to the killing of Floyd, who died after a police officer knelt on his neck until the man became unresponsive, as well as the death of 29-year-old Regis Korchinski-Paquet, who died after falling from the balcony of her Toronto apartment on Wednesday while police officers were inside.

Meanwhile, the Vancouver chapter of Black Lives Matter (BLM) explained in a Facebook post that while members “have been in touch with the organizers of this event,” BLM has “respectfully declined to participate” as members “do not feel that we can ensure the safety of our community in public protest at this time.”

The post continued, “Black Lives Matter EVERYDAY. Indigenous Solidarity, ALWAYS. Not just when we are collectively traumatized by another guileless savage gang of cops. We appreciate this act of solidarity and the coming together of Black and Indigenous people to facilitate healing from and amidst police brutality.

“We are very much interested in helping organize something similar in the future. Black and Indigenous community members can come together to dream up this offering. Our communities have both suffered immensely from systemic oppression and white violence. With unity, we have and will survive ... Right now, our priority and concern is keeping Black people safe and promoting some rest.”

The post also contained some advice for white Vancouverites wondering what they can do to help support anti-racism efforts.

“Please research options for dealing with community distress,” it read. “Community solutions exist and educate yourself on what they may be. We need you to stop calling the cops for situations that they do not know how to handle. Call out anti-Black racism when you see it. Acknowledge the fruits of Black culture, and stop appropriating it. Don’t ask to use the word N****r. You can’t. Pressure your city government to de-fund police budgets. Support the families of Regis Korchinski-Paquet, George Floyd and Samwel Uko. Fund organizations like Black Mutual Aid BC, Hogan’s Alley Society and numerous others like ours, working for the Black community.”