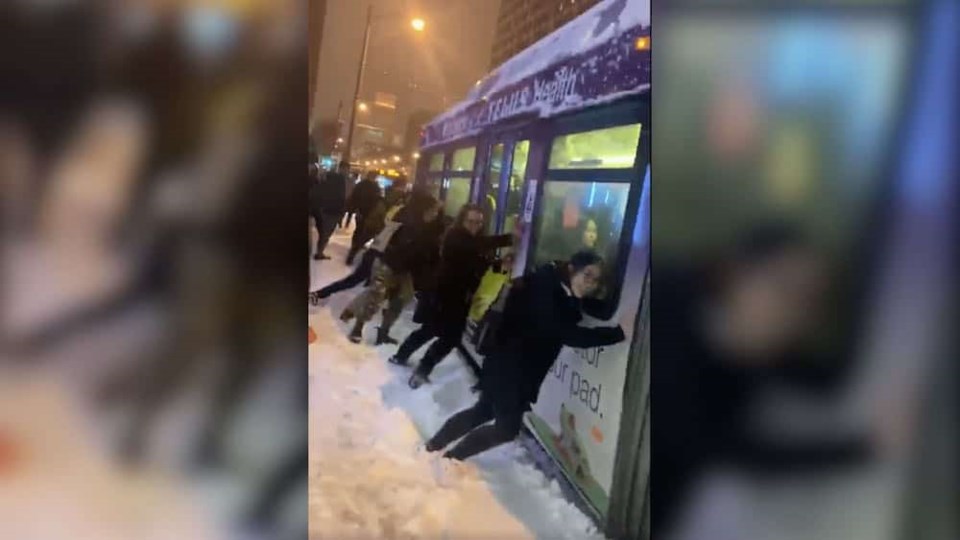 Wintry road conditions have prompted the Ministry of Transportation to advise Metro Vancouverites to stay off the road today. However, a number of people attempted their commutes this morning, but they might still be stuck on the road.

For example, at 9:05 a.m. on Wednesday, Jan. 15, @callmezanne tweeted a video of a large group of people struggling to push a bus up a snow-covered hill. She notes how a TransLink bus, "got stuck again," and that the city really doesn't know how to handle snowfall on the roads.

In what appears to be a separate instance, @garbeigeartiste tweeted an image of a smaller group of people pushing an R5 Hastings RapidBus up a snowy hill. The would-be rider quipped, "@TransLink your toxic ex who says theyre gonna change but every time, it's the same old shit."

@TransLink your toxic ex who says theyre gonna change but every time, it's the same old shit pic.twitter.com/xr6ODCN2e1

TransLink has declared Wednesday "an extreme travel day," and is advising would-be riders to "stay home where possible."

Some SkyTrain stations are closed, and some bus routes are completely cancelled.

Today is an extreme travel day; please stay home where possible. Bus & SkyTrain is significantly impacted and several Stations inc King George, Sapperton and Braid are closed due to inclement weather.Please view all alerts to see the impacts to your route.

Metro Vancouver chef kept $500,000 slots win secret from wife for two days
Sep 26, 2020 7:25 PM
Comments
We welcome your feedback and encourage you to share your thoughts. We ask that you be respectful of others and their points of view, refrain from personal attacks and stay on topic. To learn about our commenting policies and how we moderate, please read our Community Guidelines.