Homicide cops have named the man shot dead at a restaurant in Richmond on Friday night.
Sep 21, 2020 2:12 PM By: Alan Campbell 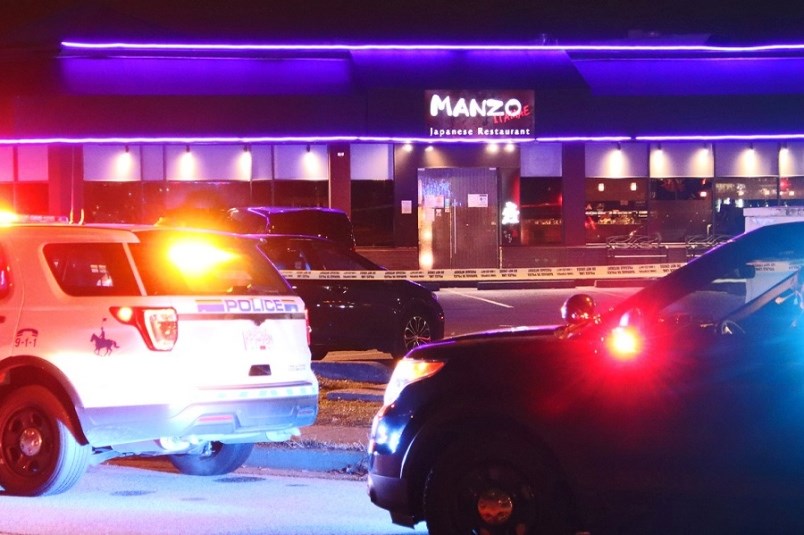 Two men who were known to police were the targets of a shooting at this Richmond restaurant on Friday night. One of them died of his injuries. Shane MacKichan photo

Homicide cops have named the man shot dead at a restaurant in Richmond on Friday night.

The Integrated Homicide Investigation Team (IHIT) said that 44-year-old Jian Jun Zhu, who is known to police, died of gunshot wounds after the incident at the Manzo restaurant on Capstan Way.

The second shooting victim, a man in his fifties who has not been officially named but is also known to police, was treated for non-life threatening injuries and has since been released from hospital.

IHIT said the incident is believed to be targeted and is asking the public for help in identifying any vehicles involved.

Any drivers with dash cam video from the area of Garden City Road between Capstan Way and Cambie Road between 6:30 p.m. and 8:30 p.m. on Friday, Sept. 18, are urged to contact IHIT immediately.

“This was a brazen shooting that could have resulted in further victims,” said Sgt. Frank Jang, of IHIT.

“IHIT will be engaging all of its partners including CFSEU-BC and RCMP Federal Policing to identify those responsible.”

IHIT has taken charge of the investigation and is working closely with the Richmond RCMP to complete an extensive canvass for witnesses and video surveillance footage.

Although both victims are well known to police, IHIT said there is nothing so far to suggest this incident is connected to the ongoing Lower Mainland gang conflict or any of the other recent acts of violence.