Port Moody Mayor Rob Vagramov said the past five months — facing a sexual assault charge, which he has denied — were sometimes “frustrating.”
0
Sep 10, 2019 7:13 AM By: Diane Strandberg 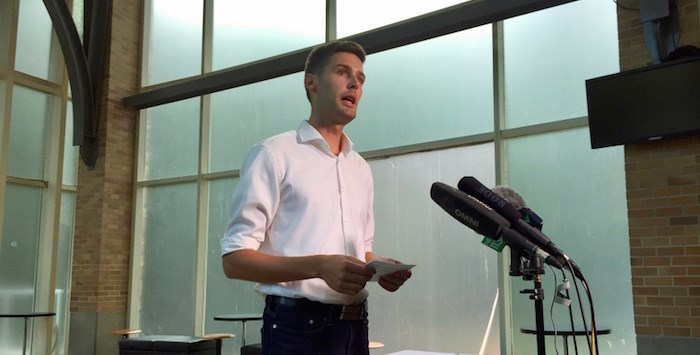 Speaking before a crowd of media at city hall in the afternoon, Vagramov said the past five months — while handling personal legal issues pertaining to a sexual assault charge, which he has denied — were sometimes “frustrating.”

But Vagramov said he’s ready to come back because he said it appears he needs less time to deal with the case as it proceeds summarily through the courts and it would “no longer require a trial.”

“I personally don’t want to be waiting any longer than I absolutely have to to get back to the priorities” at city hall, Vagramov read from a statement.

He added of his legal woes, “The heavy lifting has been done. I am no longer required to give as much time to the case itself.”

Asked about the criminal file, which returns to Port Coquitlam provincial court Sept. 12, and for more details pertaining to the charge that’s alleged to have happened between April 1 and July 10, 2015, Vagramov declined to elaborate.

“On the advice of my attorney, I am not able to comment on any part that has to do with the legal side of it.”

In June, as reported by The Tri-City News, special prosecutor Michael Klein applied for the charge to proceed summarily, meaning a potentially smaller penalty if he’s convicted; defence counsel was in consent of the move.

As for his priorities in the mayor’s chair, Vagramov said he looks forward to expanding Rocky Point Park and resolving the Bert Flinn Park debate.

Vagramov said he was disappointed with the right-of-way decision in May as well as other vote splits by council since he’s taken a leave of absence. The “constant 3-3 votes” are a driver of anxiety in the municipality, he said.

Vagramov said he’s “excited” to return to office and work for the next three-and-a-half years to implement the mandate that got him elected. And he is concerned about the lost time away from his civic duties and its impact on policy.

In June, the mayor announced he would no longer be accepting his $111,833 salary during his leave.

Monday morning, following his comeback to city hall, municipal managers issued a press release stating Vagramov would return to his regular jobs, including his committee and board posts, effectively immediately.

However, he won’t be back in his role as chair of the Port Moody Police Board. Coun. Meghan Lahti will continue in that position. As well, acting mayor Hunter Madsen returns as city councillor.

In a text to The Tri-City News, Coun. Diana Dilworth stated she hopes the "mayor's return will bring with it certainty, stability and a renewed focus to working on the priorities we have identified within council's strategic plan."

Dan McLaughlin, communications counsel with the BC Prosecution Service (BCPS) confirmed "the charge Mr. Vagramov is facing is still before the court. Accordingly neither the special prosecutor nor the BCPS will be commenting."