A new bylaw would compel owners to pay policing and cleanup costs when their properties are used as drug labs or illegal marijuana grow-ops
Jan 27, 2020 4:31 PM By: Cornelia Naylor 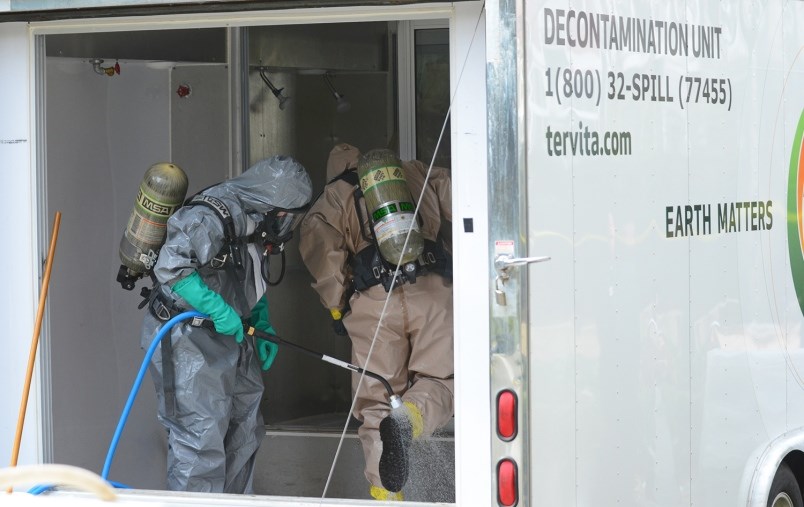 Members of the RCMP’s CLEAR (Clandestine Laboratory Enforcement and Response) team helped clean up a fentanyl drug lab in a townhouse complex in the 6800 block of Prenter Street in March 2016. Photo by Cornelia Naylor/Burnaby NOW

Burnaby’s top cop is urging the city to pass a bylaw that would compel owners to pay policing and cleanup costs when their properties are used as drug labs or illegal marijuana grow-ops.

In a report to the city’s public safety committee last week, Chief Supt. Deanne Burleigh said the emergence of fentanyl and other dangerous concentrated opioids being used in street drugs has led to more complex and costly enforcement and cleanup operations for police.

Streets, neighbourhoods or buildings may need to be evacuated or cordoned off for extended periods of time, according to her report, and whenever the detachment encounters an illicit drug lab or dump site, it is required to call in the RCMP’s Clandestine Lab Enforcement and Response Team (CLEAR).

“When the CLEAR team is not on shift and is called out to attend a scene, all associated overtimes costs are borne by Burnaby detachment,” Burleigh said.

It can cost tens of thousands of dollars to secure, clean up, and remediate properties, especially if they’re located in a high rise building, according to the report.

“These costs for cleanup and hours of investigation time are ultimately passed on to city taxpayers,” Burleigh said.

A bylaw compelling property owners to pay those costs would prevent “willful blindness” to illegal activities happening on their property, she said.

Like those cities, Burnaby should invoice owners for costs, according to Burleigh, and any unpaid costs at the end of the year should be added to the owners’ property tax bill as taxes in arrears.

“This is turn would serve as a deterrent to absentee landlords and ultimately place the financial burden to the appropriate individual(s),” states the report.

The public safety committee voted to recommend city council direct staff to prepare a new bylaw as proposed in the report.