A surveillance video released late last month shows an RCMP officer in Kelowna dragging Wang – a nursing student at UBC Okanagan – down the hallway and stepping on her head, during a wellness check at her apartment in January.
Jul 11, 2020 3:52 PM By: Elana Shepert 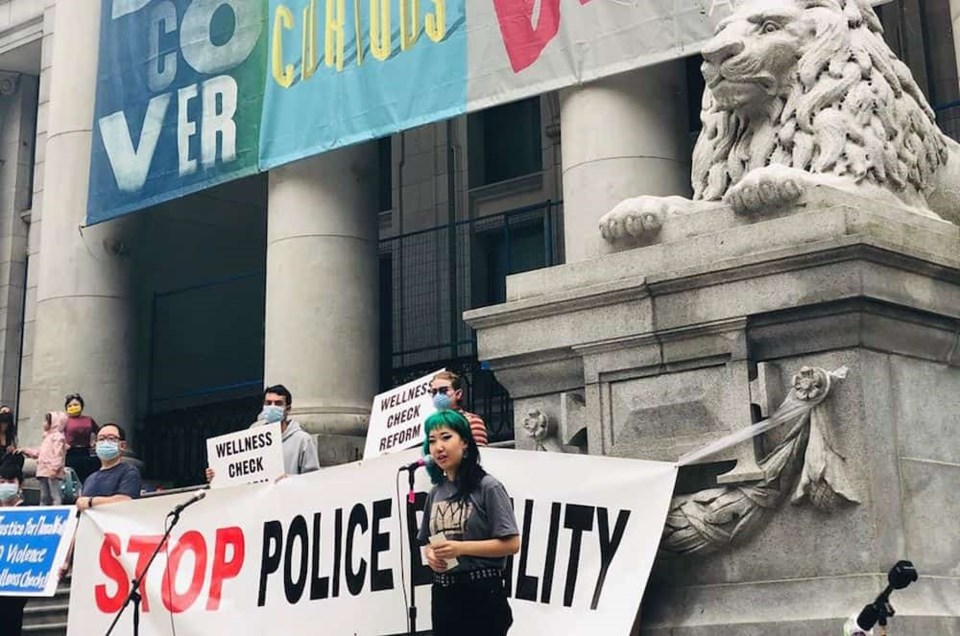 Demonstrators gathered in front of the Vancouver Art Gallery Saturday afternoon calling for an improvement of police wellness checks and to demand justice for Mona Wang.

A surveillance video released late last month shows an RCMP officer in Kelowna dragging Wang – a nursing student at UBC Okanagan – down the hallway and stepping on her head, during a wellness check at her apartment in January.

In a Facebook post for the Vancouver protest, an organizer writes that, "Mona is a gentle, kind and peaceful girl. She entered UBC with excellent academic records into the nursing program. Unfortunately in January this year, due to extensive stresses from her study and personal life, Mona had panic attack. She then consequently overdosed on Tylenol and Melatonin in her condo in an attempt to commit suicide. Not answering her boyfriend’s calls, he was worried and proceeded to call 911 to request a wellness check."

The organizer also writes that the community is "extremely shocked, sad, and outraged" that a wellness check could lead to "further harm and humiliation."

Masks were mandatory at all of the rallies.

Earlier this month, dozens of demonstrators gathered in Richmond in support of Wang and to protest police brutality. The rally began at 1 p.m. on July 4 at Brighouse Park, and protesters marched down No. 3 Road before heading down to Richmond Public Library’s Brighouse Branch.

“This is Canada, we all expect an RCMP that will be the envy of the world, where citizens are arrested and their Charter rights are respected and that they're dealt with with dignity, that's what people expect. It's not a high standard, it's a very low bar.”

An online petition calling for the firing and charging of Const. Browning has reached more than 371,395 signatures.

"I'm sure we can all agree that the use of force that Wang was subjected to was definitely neither "limited" nor "reasonable" or "necessary". Browning's job was to de-escalate a situation and help someone in a mental health crisis. Not only did she fail to do her job correctly, she also physically abused Wang and lied about her using drugs as an excuse," reads the petition.

"We need to do better for our citizens struggling with their mental health. They should be met with trained professionals, not uniformed officers. The most vulnerable people in our communities should not be dragged down hallways, pulled by the hair, and stepped on in their times of need."

Proud to be participating in this protest.👊🏻 *Check the link in my bio to sign the petition.* #justiceformona #justiceformonawang #mentalhealth #wellnesschecks #policeaccountability #kelowna #policebrutality #rcmp #canada #monawang

Wang filed a civil lawsuit in March against the RCMP officer in the video below, who has since been placed on administrative duties and is facing a code of conduct investigation.

WARNING: This video is extremely disturbing.