‘Are we the next one?’: Tri-City pub contemplates future amid tightening COVID-19 restrictions

“They basically just killed another 30% of our business,” said a pub operator, pointing to the new restrictions on serving alcohol past 10 p.m.
Sep 10, 2020 1:06 PM By: Stefan Labbé 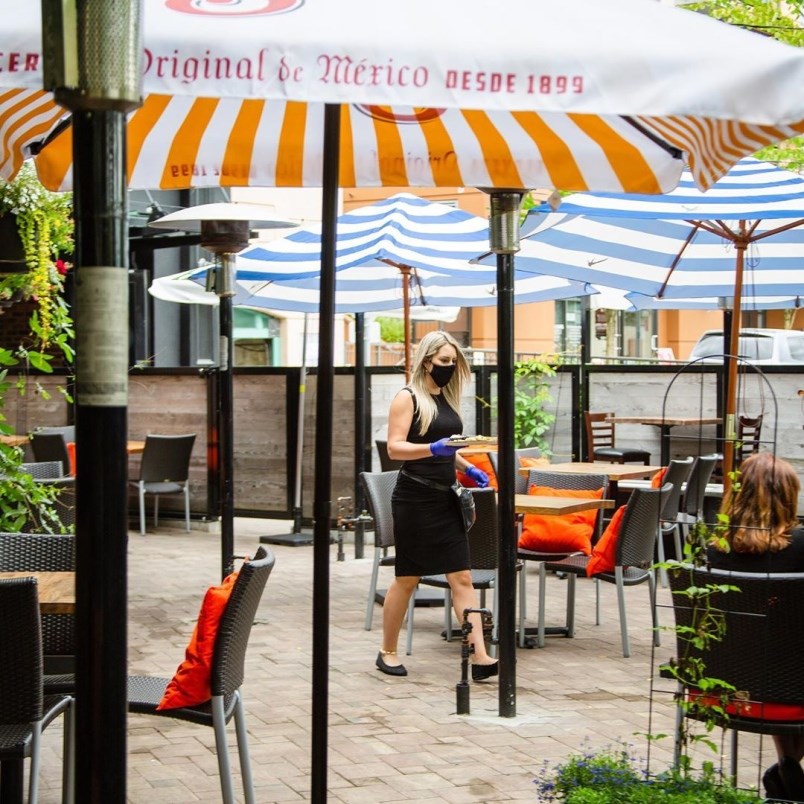 A server at the Taphouse during the COVID-19 pandemic. Management said new rules to limit alcohol sales to before 10 p.m. could lead to a 30% loss in revenue for the Coquitlam establishment. Photo: The Taphouse via Instagram

A day after B.C.’s provincial health officer amended a public health order shuttering nightclubs and standalone banquet halls and banning the serving of alcohol past 10 p.m., at least one Tri-Cities establishment found itself scrambling to make up for a steep decline in revenue.

On Wednesday, Dr. Bonnie Henry pointed to how nightclubs and banquet halls were linked to the resurgence of cases in Quebec, Ontario and South Korea, likening them to the dangers posed by cruise ships earlier in the pandemic.

“We’ve seen transmission events happen repeatedly at those venues,” said Dr. Henry. “The things that people got to a nightclub to do: it’s an inherently risky thing at this point in a pandemic.”

The Surrey Board of Trade came out Wednesday, criticizing the provincial health officer for lack of warning and consultation around the order. But for the Taphouse's Owen Coomer, while it "kind of came out of nowhere", it wasn't all that surprising after watching August's rise of cases and exposures.

"We’re not even in the state where people are cooped up,” he said

With locations in both Coquitlam and Surrey, Coomer said the Taphouse operates some of the largest hybrid pub-nightclubs in the province. Since they reopened in June, following several weeks of closure in the early stages of the pandemic, business has been down. It's now among many local businesses that had already been openly wondering how they would attract customers as we move into the fall.

“Our margins are razor-thin,” said Coomer, noting the establishments have consistently moved away from the nightclub vibe with every health order.

In addition to the increased sanitization, that’s meant shutting down karaoke, cancelling DJs and live music and reducing the overall number of customers at any given time.

Still, most of their revenue comes from the post-9:30 p.m. crowd.

“They basically just killed another 30% of our business,” said Coomer, pointing to the new restrictions on serving alcohol past 10 p.m.

One of his boldest ideas is to mock up the establishments as “prohibition-style bars” where handcrafted mocktails are served alongside a late-night kitchen, dressed up guests and the jazz tunes of a 1920’s speakeasy.

With a 444-person capacity at its Coquitlam location and 514 in Guilford, Coomer said the Taphouse can weather the new restrictions in a way some smaller establishments can’t.

“We’re struggling as a business obviously, but we’re still afloat,” he said, predicting, half of the “mom and pop” businesses across the Tri-Cities—indeed all of Metro Vancouver, won’t last into the new year.

PATIOS IN THE AIR

One of the major lifelines to small restaurants, brew-pubs and breweries has been the opening up of patios on adjacent sidewalks and streets.

With fall coming, the outdoor patio scene may be coming to an end, and that has businesses beyond the Taphouse worried, according to Michael Hind, director of the Tri-Cities Chamber of Commerce.

“That revenue has been keeping them alive in some way. That’s going away. The question is: Can you function without a patio scene?” said Hind, admitting he has yet to find a good answer.

Ian Tostenson, president of the BC Restaurant and Foodservices Association, says a simple solution is to create winter patios. It's one of several ideas no one would have entertained six months ago.

And while Tostenson says Dr. Henry’s new amended order shouldn't have much of an effect on establishments that run purely as restaurants, those relying on a late-night crowd is another matter.

Before COVID-19 hit B.C., Coomer said the Taphouse was looking to expand into a third Metro Vancouver location in Langley. Perhaps counterintuitively, said Coomer, the closure of other pubs and nightclubs could mean an expansion for anyone able to ride out a downturn in business.

“I hate to say that companies like ourselves are looking at this like it’s an opportunity,” he said. “But if Cactus Club and Brown’s are shutting down at 10 p.m., can we keep the kitchen open?”

Still, roadblocks abound, and the Taphouse has had scares at both of its locations. The first was after a public exposure at it’s Coquitlam branch in early August and another in Surrey a couple of weeks later when a staff member came in sick, was sent home and later tested positive for the coronavirus.

“Considering what happened at the Coquitlam location, we were doing our best,” he said, frustrated by what he described as a pattern of bars across Metro Vancouver keeping multiple COVID-19 clusters out of public scrutiny.

“I get it,” he said, pointing to the new measures. “There’s a lot more places that have been hit by this than they're saying.”

Where the spike in COVID-19 cases across the province go and how many are attributed to young people in social settings could dictate the future of many businesses that rely on late-night alcohol sales.

“Are we the next one?” asked Coomer. “There is always a fear. Every day we plan like this could be the last one.”

Many questions remain unanswered, like whether businesses will still be able to sell alcohol after 10 p.m. if it’s going to a customer through such delivery services as Skip the Dishes, or if BYOB corkage fees count under the new restrictions.

“It’s going to be an interesting couple of months,” he said.

— With files from Nelson Bennett and Wayne Moore