In a video that went viral on WeChat, a Chinese social media platform, a woman is seen yelling racial slurs in a Richmond parking lot.
0
Aug 24, 2019 10:33 AM By: Richmond News

A troubling video of a woman yelling at a Chinese immigrant to “Go back to China where you belong” in the parking lot of a Richmond grocery store went viral on Chinese social media Friday afternoon. 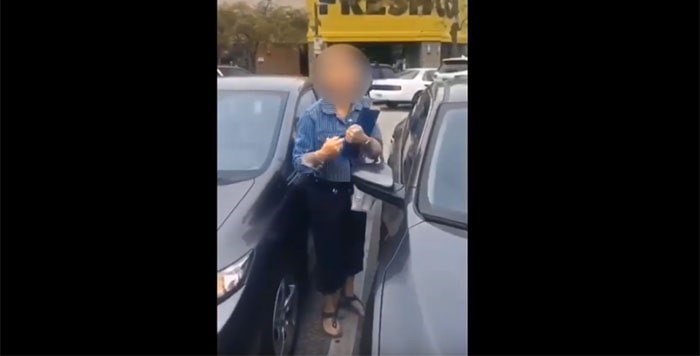 In a video that went viral on WeChat, a Chinese social media platform, a woman is seen yelling racial slurs in a Richmond parking lot. Photograph By Video screenshot

The footage (below) – which was originally posted on WeChat – shows an unidentified Caucasian woman yelling at the individual behind the camera, saying “You don’t know a damn thing, go back to China where you belong."

Fang Xu, whose wife Amy Xu recorded the video, said that Amy Xu had taken their daughter and Fang Xu’s mother shopping at Richlea Square Shopping Centre on No.3 Road Friday afternoon. Then another car suddenly parked too close to Amy Xu’s vehicle, and the car owner left the car right away.

Fang Xu said that his wife waited for the owner to come back, and that Amy Xu then told the woman that her car was parked across the white dividing line.

However, instead of apologizing, the woman asked Amy Xu, “Where you are from?”

In response, Xu said that “this question has nothing to do with the parking.”

“You don’t know a damn thing, go back to China where you belong,” said the woman, who then swore at Amy Xu and used a racial slur.

According to Amy Xu, she only captured 15 seconds of the woman’s xenophobic rant before leaving the parking lot with her daughter.

Fang Xu also said his daughter is having trouble sleeping because of the incident.

According to Insp. Sunny Parmar, the RCMP are actively investigating the video and will be speaking with the victim.

“Based on the video, we initiated an investigation into what had happened, and late (Friday) night the victim did come forward, so the investigation is still ongoing,” said Parmar.

Both parties in the video have been identified, and investigators have been in contact with all involved, according to a statement released by the RCMP on Saturday.