Burnaby is getting four rainbow crosswalks at prominent intersections

The City of Burnaby is moving ahead with a plan to paint rainbow crosswalks at four prominent intersections.
0
May 30, 2019 12:15 PM By: Kelvin Gawley

The City of Burnaby is moving ahead with a plan to paint rainbow crosswalks at four prominent intersections. 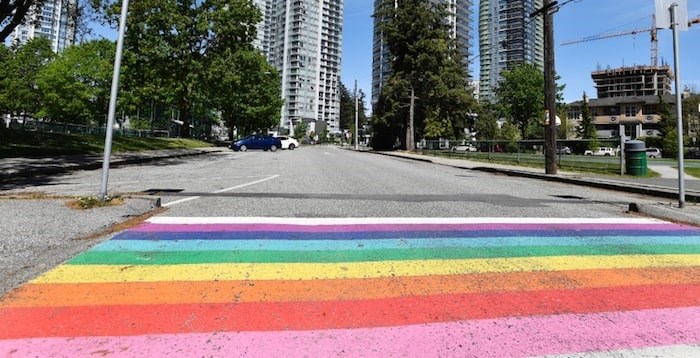 This rainbow crosswalk was painted on Jubilee Avenue ahead of last year’s Pride Street Party. Photo by Jennifer Gauthier

“This, I think, is pretty straightforward. Burnaby has been lacking in recognizing a significant certain sector of our population, one that hasn’t been necessarily welcomed in our events over the last 40 to 50 years,” said Coun. Dan Johnston, who presented the motion.

City staff have been asked to identify an intersection in each of Burnaby’s four quadrants where a Pride crosswalk can be painted. The plan is to have the first one complete before the city’s second-annual Pride Street Party on Aug. 10.

“It’s a very timely motion and one that I fully support,” he said.

The city painted a rainbow crosswalk on Jubilee Avenue last year, where it held the city’s first official Pride event. The crosswalk remains now, but Johnston said he wants to see others at busier intersections on roads such as Hastings Street, Kingsway, Edmonds Street, North Road or Lougheed Highway.

“I think it's time that we don't necessarily put (a rainbow crosswalk) on a quiet street that nobody even notices it’s there,” he said. “I think if we're going to do it, they should be in places where people can see them, enjoy them.”

Johnson said the crosswalks should be funded by the city’s casino revenues, rather than property taxes.