A Vancouver couple has captured an incident of extreme reckless driving on Tuesday, June 25 at an intersection at Main and Hastings Street in Vancouver.
0
Jun 26, 2019 10:04 AM By: Elana Shepert 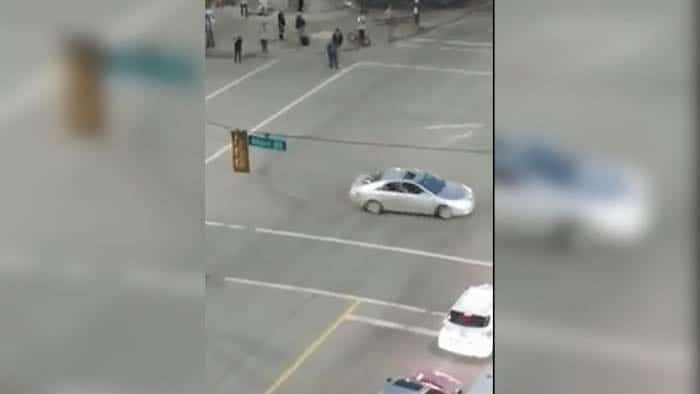 A Vancouver couple has captured an incident on video of extreme reckless driving on Tuesday, June 25 at the intersection at Main and Hastings Street in Vancouver.

Jonathan Dillon and Chantelle Adams were at home when they heard a great deal of commotion and noise outside of their window at around 9:55 p.m. on Tuesday evening.

Vancouver Is Awesome spoke to Jonathan Dillon, Vancouver resident, about what took place after they first heard the noise outside of their apartment.

"Last night around 9:55 pm we heard tires screeching and people making a lot of noise. We looked out the window and saw a silver car doing donuts in the middle of main and hastings," he described.

Following this, Dillon reports that his girlfriend called the incident into the Vancouver Police Department. He adds that the VPD, are "handling the situation and cruisers are in pursuit."

In the video a silver car can be seen doing multiple donuts in the middle of the intersection. People appear to attempt to use the crosswalks or yell at the vehicle and then back off onto the sidewalk. Afterwards, the car continues down the street and proceeds to make more donuts further down.

Vancouver police have confirmed that they arrested a Surrey man for driving erratically, including toward oncoming traffic and pedestrians downtown.