Since construction began, the noise and dust have been near-constant, access to the parking lot has been restricted and residents have lost access to their prized outdoor green areas, says the angry tenant.
Jul 11, 2019 5:50 AM By: Kelvin Gawley

Dale Arnold stays at the office as late as possible every night to avoid going home to a noisy construction zone.

He says he has been subjected to thunderous noise and thick dust clouds in his Metrotown apartment since the construction of two towers began “ridiculously close” to his building in 2017. 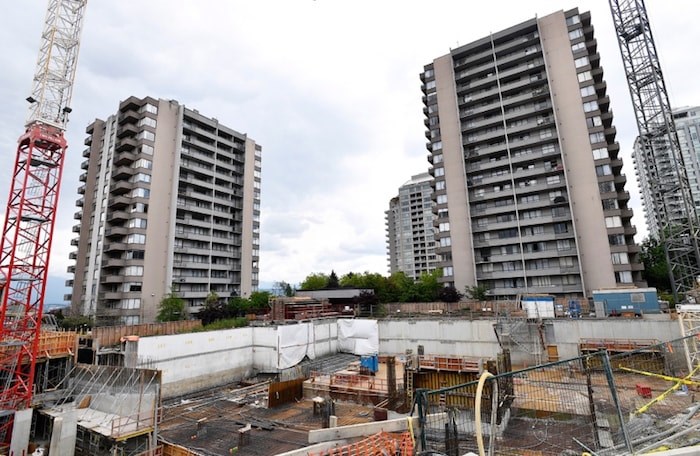 A new rental tower is being built closer than usual to an existing building, but within building code restrictions, according to the City of Burnaby. Photo by Jennifer Gauthier/Burnaby NOW

He has rented an apartment in one of two Parkview Towers on Hazel Street for nearly 10 years.

Burnaby council approved a proposal in 2016 to add two highrises – a 31-storey, 238-unit rental tower and a 41-storey, 321-unit condo tower – and a new church to the lot between Hazel, McMurray Avenue and Sussex Avenue.

He said Parkview residents were largely unaware of the details of the rezoning application at the time – and had no idea how the coming construction would affect them.

“We have lives; we’re working people,” he said. “You have no idea the enormity of it.”

Since construction began, the noise and dust have been near-constant, access to the parking lot has been restricted and residents have lost access to their prized outdoor green areas, he says. The elevator in the building has also regularly gone out of service as a result of construction crews drawing large amounts of electricity from the existing buildings’ supply, Arnold believes.

“They’re cannibalizing our building,” he said.

“During water main work, residents can expect an elevated level of noise and vibration as well as dust from the coring of concrete walls necessary to run the new lines. We ask that you take care of delicate belongings and artwork on walls that may be susceptible to ‘walking off’ tables etc. from the extra vibration.”

The letter, provided to the NOW, goes on to inform residents the site is “considered a construction zone."

Instead of financial compensation for the impacts of the construction, the current property manager, QuadReal Property Group, offered cupcakes and a barbecue in the parking lot, according to Arnold.

But the “final straw” came when QuadReal informed him his rent was being increased. He instead stopped paying rent altogether – calling it a matter of principal. He described himself as a mild-mannered man not prone to challenging his landlord, but said he couldn’t stomach paying more rent to a landlord who had “eliminated every ounce of quality peace of mind.”

“I resent like crazy having my rent increased,” he said.

Arnold lost a Residential Tenancy Branch complaint for withholding rent but the arbitrator didn’t take into account the conditions that led him to do so, according to his sister, Sharon Lucas, who helped him with his claim.

A housing ministry spokesperson said she could not confirm details of any RTB ruling due to privacy concerns.

Lucas said Arnold hopes to file a new complaint seeking compensation for his loss of quality of life.

According to Arnold, there are dozens of Parkview Towers residents who have been impacted by the construction as much, or more than, he has. Many of them, however, are recent immigrants and working class people with fewer opportunities to stand up to the landlord, he said.

QuadReal’s vice president of corporate communications, Rebeca Catley, did not respond directly to all of Arnold’s claims relayed by the NOW.

“We take the concerns of our residents very seriously and respond to all inquiries in a timely and appropriate fashion,” she wrote in an email.  “This 238-unit, all-rental project meets every regulatory requirement set out by the City of Burnaby, including those related to construction.”

The City of Burnaby has received “some noise complaints at this site related to construction activities,” according to spokesperson Chris Bryan.

“Where the concern was not after the fact or was ongoing, we investigated, took measurements and responded accordingly,” he said.

The new rental tower is approximately 20 metres from Arnold’s building at its closest point, which is compliant with the building code but is “closer than typical,” according to Bryan. “This was considered an acceptable compromise in order to gain the additional rental housing on this lot,” he said.

“We empathize with anyone who has experienced disturbance caused by construction,” Bryan wrote.