Getting up at 2 a.m. every day to rummage through Richmond’s dumpsters might not be everyone’s idea of how to stay mentally agile and physically active.
May 28, 2020 2:11 PM By: Alan Campbell 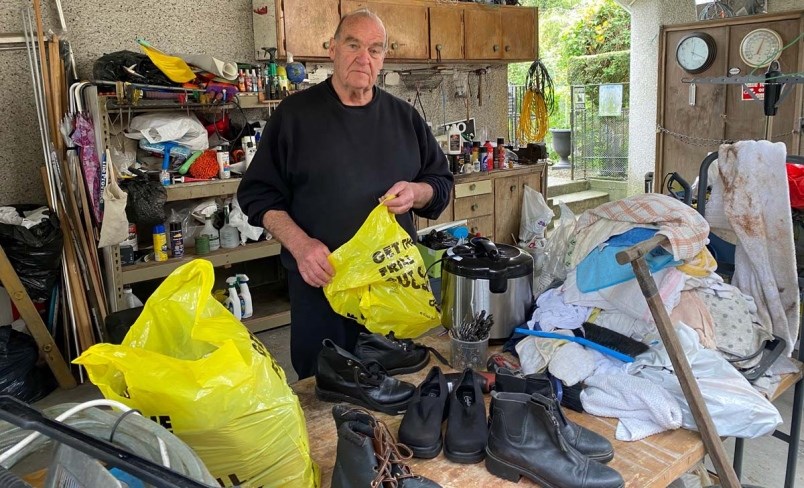 Earl Clapp gets up at 2 a.m. every day to go dumpster-diving. Everything he finds gets donated to people in need. Photo by Rob Akimow

Getting up at 2 a.m. every day to rummage through Richmond’s dumpsters might not be everyone’s idea of how to stay mentally agile and physically active.

But it is, quite literally, right up Earl Clapp’s alley and the near 77-year-old almost feels a little guilty to be having so much fun in retirement.

The former policeman has been spending his 21 years of retirement walking a very different beat than he did for most of his working life.

Clapp, who lives in his own detached house in the Aberdeen area, wakes up about 2 a.m. each morning due to his body clock from working shifts all his life.

He has a coffee, watches a little TV, then heads out about 3:30 a.m. on his “rounds,” checking out the same dumpsters, one by one.

“If I find anything I get it sorted out in my carport right after,” Clapp told the Richmond News, adding that he usually gets back to his house about 5:30 a.m. and then takes his dog for a walk.

“Then I have breakfast and start on with the rest of the day, perhaps distributing what I found. Just the other day, I found two bags of shoes to distribute to the Downtown Eastside.”

Clapp then becomes a “normal” person, going to doctor’s appointments, banking and sometimes sharing baking with others.

All of his pre-dawn “raids,” however, are not just for his own mental and physical wellness.

In fact, they’re all primarily geared toward Clapp’s chosen vocation in retirement — helping others.

“From the day I stopped serving in the police, I started a new life of helping people, collecting cans and whatever I could find to donate to people in need,” he said.

“All the goodies that I find I share with people there. I also have a knack for fixing things for people. How can you beat helping people?

“I help absolutely anybody. I guess you can you say I’m a bit of a freelancer. I have a network of people I know to give stuff to, clothes to distribute and whatever else I find.

“And if people in the network also hear of anyone that needs those items, I get it to them. Even if it’s weeks down the line, I will remember that someone needed something, and if I find what they needed, they will get it.”

And even if Clapp doesn’t find the item in need, he sometimes goes out and buys it himself to give to the person.

“I just tell them I found it…to spare their dignity,” added Clapp.

Indeed, it was during a daily dumpster dive seven years ago that Clapp found, by accident, a place where his desire to help others was very much welcomed — Pathways Clubhouse.

“I was diving into this dumpster regularly and then realized the building next to it was Pathways…I went inside to see what was in there,” he said.

“From then on, I started to help out and I’ve been going seven days a week ever since.

“Those people (in Pathways) didn’t want to be born with mental health illnesses, but they’re kept in a kind of box (by society).

“We give those people a place to go every day.”

Asked if helping others — as well as dumpster diving — feeds into his mental wellness regimen, Clapp said, “absolutely.”

“It keeps my mind working and keeps me active.

“I don’t use any computers or devices to remind me about medication, I keep it all up here (his head). It keeps me mentally sound.

“I guess you could say I’m like a heat-seeking missile.

“I find out who needs help and I seek them out. And I have a hell of a lot of fun doing it.”