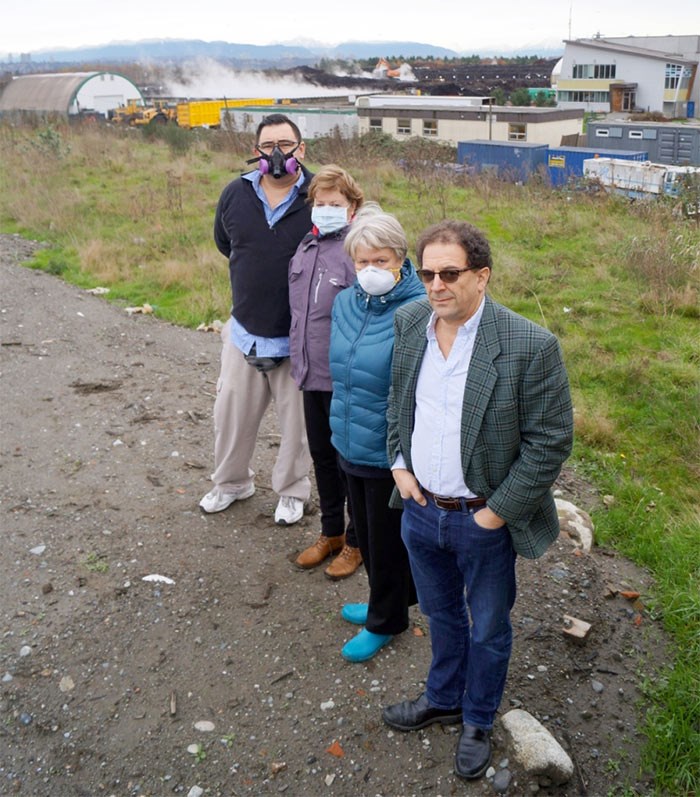 Arnold Shuchat, front, and members of Stop the Stink noted Harvest Power’s odours caused health concerns amongst residents and ruined the city’s quality of life. Shuchat, a realtor, even claimed the stink has the potential to ruin land values. Photo by Graeme Wood/Richmond News.

Developing a framework of best practices for compost waste is a good step for Metro Vancouver.

That’s according to community activist Arnold Shuchat, a realtor who heads a group of Richmond residents bent on shutting down or cleaning up the now locally-infamous Harvest Power waste-to-energy facility in East Richmond.

“We got clean air, we got out on the streets, complaints are making a difference and the regulatory bodies are on notice. In one year look at the difference in the air,” said Shuchat.

Metro Vancouver recently released a report that should work towards improving composting at regional facilities.

“The study intended to tell us what are now considered best practices for managing organic material, especially in terms of controlling odours,” explained Andrew Marr, director of solid waste planning for the regional government.

Some of the practices include enclosing the processing areas, not allowing certain wastes — such as animal meat — into the compost piles, having hard surfaces to stack the compost and issuing an odour management plan, including better communications with the public.

“They weren’t necessarily the best practices in 2009 when we started collecting food waste across the region,” said Marr.

As such, local politicians in Richmond allowed Metro Vancouver to permit Harvest Power to begin operating. What ensued, said Shuchat, was years of nausea for Richmondites.

Last year, the group, Stop the Stink Richmond, rallied online and with protests at Richmond City Hall. The City of Richmond responded in February by issuing a notice of default to Harvest Power, after complaints peaked in November, 2016, with 1,025. Harvest was forced to stop taking in waste on several occasions and reduced its overall intake. It has since been working to rectify the odour problem, which has still been identified in 1,131 complaints in 2017, to date (compared to 2,694 complaints in 2016).

Shuchat said complaints to politicians and regulators at Metro Vancouver have helped.

“The fact is, they had to deal with the problem; they may have taken longer if we didn’t get involved,” he said.

But another hurdle is left to clear, that being Harvest Power’s appeal of the existing air quality permit, which grants licence to Metro officials to conduct smell tests with their noses as a means to prove the odour is from Harvest Power.

“A smell test is not provided for in [the regulatory framework]. So that’s the problem,” said Shuchat.

“It’s still very subjective and that’s Harvest’s point. But you don’t need a [device] to know what the smell is,” argued Shuchat.

Marr said the report could serve as a guideline for changing compost regulations in B.C. and in the region.

“The ideas can look at incorporating regulations into facilities. We would have to talk to stakeholders first,” said Marr.

A review of the existing permit is expected to go to the Environmental Appeal Board in 2018, said Shuchat. There, 24 residents will argue against Harvest Power based on evidence they submit.

Regardless, by 2019, Harvest Power’s contract with Metro Vancouver will expire, at which point Marr said new guidelines could be in place for a new composting contract that other companies may bid on.

“So, I think they're getting their ducks in a row,” said Shuchat.

Harvest Power entered the organic waste fray in Metro Vancouver in 2009, when it purchased Fraser Richmond Soil and Fibre, which had largely handled landscaping waste since 1993. At the time, Harvest Power stated the takeover was an opportunity to demonstrate the company’s “industry-leading technology.”

The following year, Harvest Power received $4 million from the federal Clean Energy Fund to help bankroll its high solids anaerobic digestion facility (the “energy garden”), touted as the company’s “best-in-class” technology to turn biogas into electricity. The federal grant was later complemented by a $2 million investment from Metro Vancouver for improvements at the site, which now operates under the name Harvest Fraser Richmond Organics Ltd. Fourteen months later, in February 2012, it dipped back into the taxpayers’ well, receiving a $1.5 million grant from the provincial BC Bioenergy Network to further the energy garden project.

“This energy garden will not only create B.C. jobs, it will provide a blueprint for other waste-to-energy projects in B.C., Canada and the U.S.,” said Minister of Energy and Mines Rich Coleman, at the time.