When it comes to some dashcam footage from Richmond showing a driver on the sidewalk, the picture might tell a thousand words, but none of them are the real reason they were there.
0
Aug 20, 2019 2:22 PM By: Lindsay William-Ross 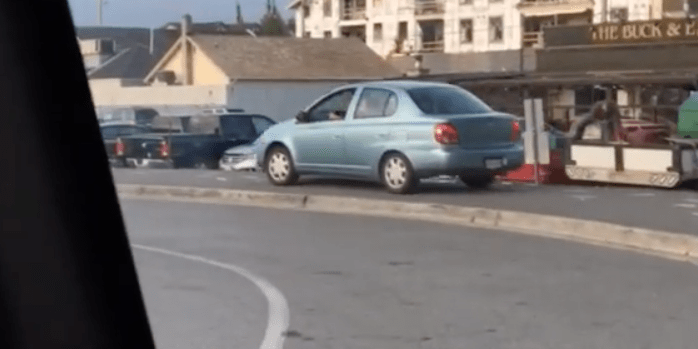 There have been a few interesting driving incidents in Richmond that we've gotten wind of in recent months. There is a Facebook group called "Richmond Learns to Drive" (a sibling, if you will, of "Richmond Learns to Park,") and there's Reddit, and there are our eagle-eyed colleagues at the Richmond News - all sources of what seems like a fountain of content related to driving mishaps of the non-injury kind in Richmond.

Take for example the time a driver opted to park on a Richmond sidewalk...steps from a sign asking that no one park there. (Never mind that in general parking on sidewalks is not the thing to do!)

Then there was this dashcam footage from over the weekend that showed what looked like a driver taking their car along a sidewalk in Richmond's busy Steveston's area. Posted to Facebook on Friday, Aug. 16 by Philip Chin, the dashcam video shows a car cutting through a pedestrian area.

But here's the thing about this video: It doesn't tell the whole story.

Not only does it not answer the poster's question "What makes people think it’s ok to drive on the sidewalk?" on the now-removed video, but it also is missing some very key context that really changes everything.

That car was there on purpose, and those pedestrians standing nearby were there to help the car and make sure no one was in the way. That's because the car was "using what also is a loading entry to the plaza area in front of the Gulf of Georgia Cannery National Historic Site."

In an email to V.I.A. Aug. 20, a rep from the Cannery explains that everything caught on camera was all on the up-and-up.

"We often have farmers’ market vendors and other event vehicles drive up there. This car had authorization to load in their equipment for our Friday evening outdoor concert series," says the Cannery. "Just want to clarify the situation to prevent the driver from suffering any undue negative comments."

Drivers doing what seem to be dangerous things in Metro Vancouver don't often have a good excuse, but when we are wrong, we are wrong, and we don't mind saying so. We've amended the original article as well.

Now: Can anyone explain why this driver made a right turn in front of a couple of lanes of traffic from all the way over in the the left turn lane recently in Richmond? Because seriously: WHAT?!