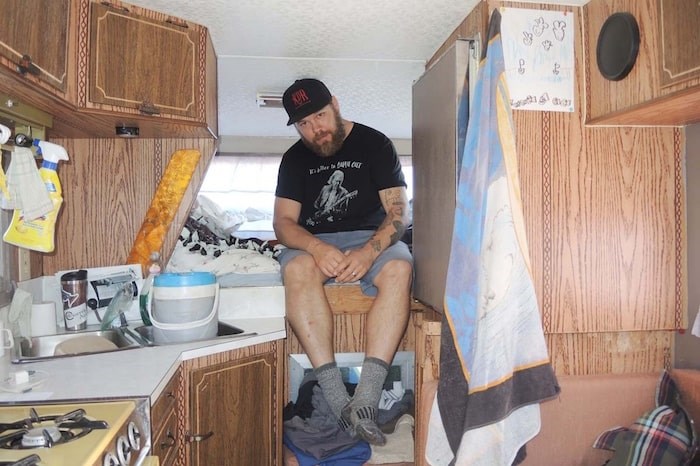 Mature student Luke Navrot wants his Steveston “neighbours” to know that he’s no threat to their neighbourhood, after receiving three complaints about his overnight parking. Alan Campbell photo

If you haven’t seen Richmond’s “happy camper” parked in Steveston’s riverfront parking lots recently, don’t worry, he’s not been run out of town.

In fact, Luke Navrot – who featured on the front page of the Richmond News two weeks ago – has found a temporary solution to his parking problems.

The News told how Kootenays native Navrot was having to live in his pick-up truck camper, parked on the Fraser River’s south arm in Steveston, while studying political science at Langara College in Vancouver.

Despite camping in peace for the last year or so, a few weeks ago, he started to get hounded by City of Richmond bylaw officers, who were responding to resident complaints about his overnight parking.

All the 38-year-old mature student wanted was to not be feared by his temporary, adopted community.

Since the story was published in the News, however, many sympathetic News readers came forward and offered the likes of vacant lots and parking spaces for Navrot, until he graduates next spring.

The News caught up last week with the student camper, who thanked everyone who came forward with offers of assistance.

To protect the privacy of the person who has helped him, though, Navrot would only say that he had found a local parking solution and now wanted to concentrate on his studies.

The city’s complaint-driven parking bylaw prohibits anyone parking in the same place for more than 72 hours.

Navrot attracted three such complaints in recent weeks and, subsequently, received two warning notices from the city’s bylaw department, forcing him to move each time or risk paying a $75 maximum fine he could ill afford.

He previously told the News how he and his wife, in 2016, rented their 1940s, renovated 1,100-square foot former mining house in Kimberley, before moving to Vancouver so he could study at Langara.

Being almost 40, he was looking to “get into something else (meaningful) before it’s too late.

Navrot and his wife initially rented an apartment in Vancouver for $1,800 a month, plus utilities, before the cost became too much.