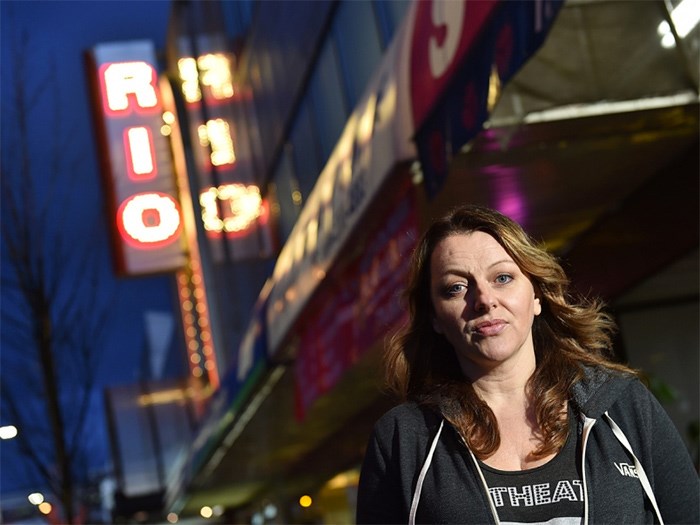 Lea’s run at the helm of the Rio Theatre stretches into its second decade as of May 1, but how much longer that continues was brought into question late last week when a real estate brochure listed the Commercial Drive institution as being for sale.

Lea knew the property had been on the market for the better part of a year, but given the lack of offers, she put the issue on the backburner.

“I’m feeling a little stressed for sure,” Lea told the Courier Monday. “I was just focusing on saving money and getting ourselves in a better position. I wasn’t expecting to have to deal with this so soon.”

Built in 1938 and located near the intersection of Commercial and Broadway, the property has been owned by theatre magnate Leonard Schein since 2011. Lea and a group of about 10 other investors first purchased it in 2008, but sold it to Schein when the market for single-screen theatres took a nose dive.

She’s continued on as the operator and manager since.

News of the sale quickly blew up on social media over the weekend, and offers of support and financial help have poured in. That’s the good news. The bad news is that Lea is now concerned the attention kicked up over the last few days will invite renewed interest from potential purchasers. That prospect now has her expediting talks with Schein to buy the property back, and Lea’s expected to make an offer in short order.

Schein told the Courier Tuesday he’s in no rush to sell the property and hasn’t fielded any new offers since news broke over the weekend.

He wants to sell it back to Lea, though he has no timeframe, nor a potential price tag in mind.

“She’s doing well,” Schein said. “We don’t need to be there to save the theatre anymore. We only did that on a temporary basis so that the theatre would go on. She’s doing that successfully and hopefully she will be able to buy it.”

Lea figures it’s going to take at least $1 million and is now getting her funding push together.

“I don’t have the million-dollar cheque just sitting there,” she said. “But I have a handful of people interested and I’m sure once we know we have a confirmed offer I’m sure we would get more.”

The land is assessed at roughly $4 million, and Lea’s lease has another eight years on it. Should the land get sold, the new owner would have to honour the duration of her lease, she said.

There are some legislative measures in place that will help in Lea’s fight. The Grandview-Woodland community plan specifically calls for preservation of the area’s heritage and culture sites such as the Rio, the Cultch and the York Theatre. Building restrictions in the area limit development to 10 storeys.

This isn’t the first time Lea’s business has felt the pinch, as she won a protracted battle for a liquor licence with the province in 2012. Around that same time, the business model moved away from solely movies, to live music, burlesque, comedy shows and other events.

The theatre has been in the black since then, and Lea says she’s uninterested in fielding offers to buy out the remainder of her lease.

“I feel like I already fought enough and now I have to climb another mountain. On a personal level, it can get very exhausting,” she said. “But I feel like I have no choice because I love the Rio and I love what I do. I’m not just going to let it go.”