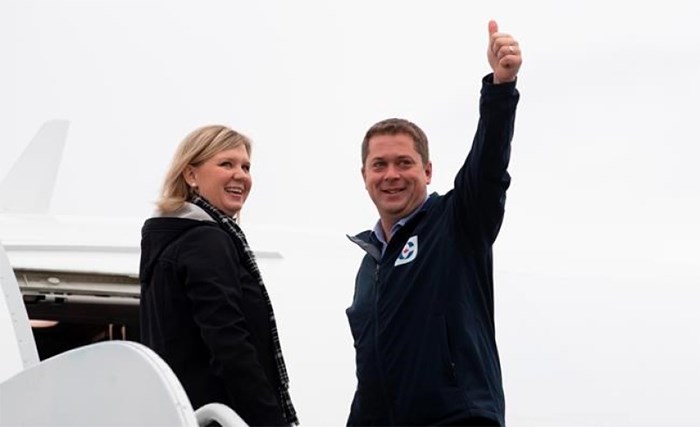 Conservative leader Andrew Scheer gives the thumbs up as he and his wife Jill board the campaign plane in Ottawa, Monday October 14, 2019. THE CANADIAN PRESS/Adrian Wyld

OTTAWA — Election day is now just a week away — and talk has turned to what the House of Commons is going to look like when the dust finally settles.

With polls warning of a minority Parliament, NDP Leader Jagmeet Singh — who insists he's running to be prime minister — is spelling out his conditions for working with his political rivals, including Liberal Leader Justin Trudeau.

There's only one party with whom Singh says the NDP will have no truck or trade: Andrew Scheer's Conservatives.

For his part, Scheer has moved past Oct. 21 and is painting a portrait of himself inside the Prime Minister's Office, detailing what the first 100 days of a Conservative government would look like. He'll take that message to Winnipeg today.

Trudeau, meanwhile, is telling anyone who will listen that the only way to prevent a Conservative government is to vote Liberal.

He gets underway today in Windsor, Ont., before making his way through southwestern Ontario. Singh is lingering in B.C., hoping to maintain the momentum he's been enjoying since last week's debates.

This report by The Canadian Press was first published on Oct. 14, 2019.