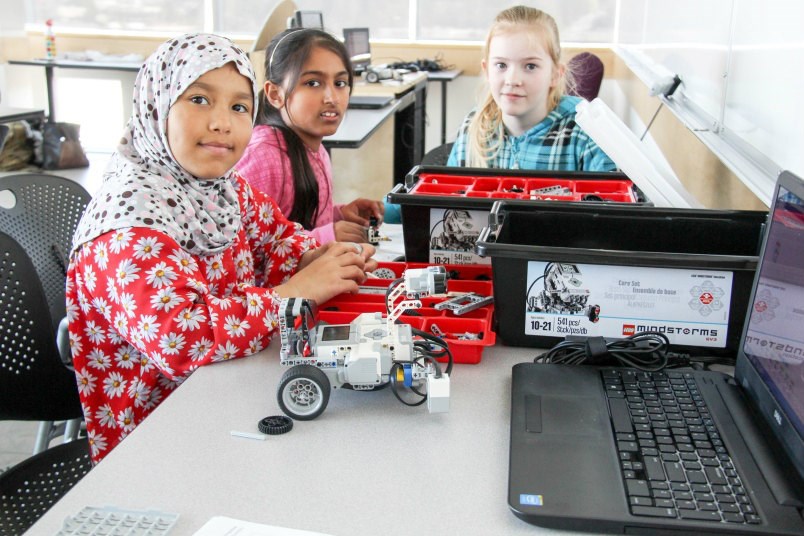 SFU offers a program that introduces coding to girls. Photograph By SUBMITTED

That was the basic message from Andrew Petter, president and vice-chancellor of Burnaby’s Simon Fraser University – which, he says, used to be known as the “radical campus” for its bold ideas.

Petter, addressing a Burnaby Board of Trade distinguished speakers event May 2, was discussing a somewhat radical idea for post-secondary institutions involving ditching what he termed “ivory tower” isolation in favour of a more community-engaged approach.

The SFU head outlined a number of ways post-secondary schools can be an engine for community development – all it takes is a willingness.

“We could be doing so much more for communities,” Petter said. “The concern is that society is becoming more fragmented…where do communities look for support?”

Historically, society has looked to such institutions as factories or other large-scale industries – so-called “anchor institutions” – to help provide community infrastructure. More lately, societies look to government to achieve those goals, but many of those civic institutions are stretched to the limit financially, Petter said.

That’s why SFU is promoting the idea of post-secondary institutions leveraging their “depth of community roots” to become an engine for community development. SFU began a strategic planning process in 2012 with this goal in mind, including commissioning a study to look at ways to connect the school with communities.

Petter listed off a number of ways that SFU supports its surrounding communities beyond educating its students.

“This gives you a sense of the capacity of post-secondary institutions to benefit the community,” Petter said.

SFU is now embarking on a three-year pilot project to develop even more ways of engaging with communities, he said.

While putting more school resources into projects that benefit communities sounds good, Petter admitted that some people still need convincing that it’s not taking away from the core values of a school. Peter views it as a “value add” to a school, and not taking away from core programs.

“We all benefit when our communities are stronger,” he said.