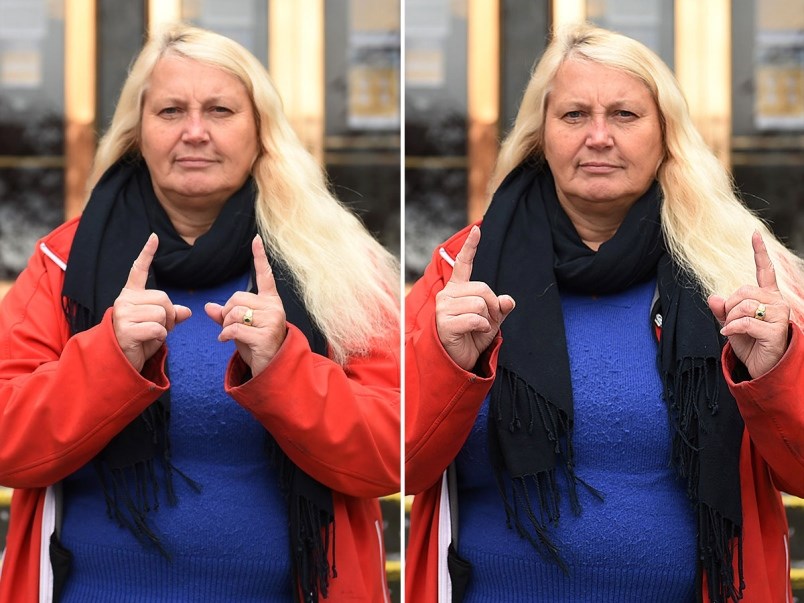 Of all the words certified freelance sign language interpreter Ava Hawkins thought she’d have to address while assisting Vancouver Mayor Kennedy Stewart at a March 22 press conference, “beer pong” came as a surprise.

The City of Vancouver hired Hawkins to interpret COVID-19-related press conferences in American Sign Language (ASL) for the deaf community. On Sunday, she was tasked with interpreting the mayor as he called out residents who weren’t taking necessary precautions to stem the spread of coronavirus, including a group photographed over the weekend playing beer pong. Stewart also introduced his plans for enforcement measures.

Fortunately, Hawkins, who can hear, was able to peek at the mayor’s notes beforehand, precisely so she could familiarize herself with the gist of his message, which makes her job easier. While aware of the beer pong party game, she never knew its name so she had to ask.

“Beer pong is two words, but in sign language, it actually comes up to be eight signs… so I have to add all these signs to have the same concept mean the same thing,” she said.

Signs have also been developed to interpret the words “coronavirus” and “social distancing,” so they don’t have to be finger-spelled.

Watch a video of Hawkins demonstrate these signs below.

Such is the life of a sign language interpreter in these times of COVID-19.

Hawkins is just one among many interpreters whose public profile has increased in recent days, as all levels of government are relying on them to translate critical information to the deaf community. Provincially, health minister Adrian Dix and chief medical health officer Dr. Bonnie Henry, are being assisted by sign language teams, including Nigel Howard, who is deaf, and ASL/English interpreters. (Read more about Howard HERE.)

Hawkins, and her colleagues, generally wear black or solid colours so their hand movements can be seen easily.

She said it’s crucial for minority communities to get “really clear” information during the pandemic.

“Having the interpreters be able to convey [the information] — it helps. It helps calm society and especially for our deaf community because for many people sign language might be their first language... especially with some of the medical terms that we're using, and some of the business terms we're using,” she said.

“They may not be as understandable to them but seeing it in sign language, they're like, ‘Oh, OK, I get it. I know what's going on.’”

Even Fire Chief Darrel Reid, who stepped back from that role last weekend to lead the COVID-19 emergency task force, called attention to Hawkins’ contribution when he spoke at Stewart’s March 22 press conference.

“I just want to mention a special person who is up here with me on the stage because communications is just as important as every other part of this response,” he said about Hawkins.

✅ Maintain a physical distance of 2 metres to help stop the spread of #COVID19. If you’re gathering in groups or going outside unnecessarily, you're risking the lives of others.@FireChiefReid @ParkBoard @VCHhealthcare @VanFireRescue pic.twitter.com/b9v1Q3Y2ik

Hawkins is also getting supportive messages from the deaf community.

“Deaf community members are sending me zillions of emails saying, ‘Oh my God, Ava, it's clear.’ That's all I want to know. Do you understand it? Well, good. If you're understanding it, and you're following the [health] rules, that's great,” she said.

“[The reaction] is extraordinarily positive. They've been very, very positive. They're just feeling included. They're like, ‘Wow, this is fantastic.’ The first day that I went and did the news, I must have got about 300 emails saying, ‘Oh, my God, thank god Ava, you’re there. Somebody is giving us news.’ It's long overdue. The city, the province, they should all be providing sign language.”

Hawkins grew up in the deaf community, so she’s a CODA — Child of Deaf Adults. Her dad’s side is all deaf, her mom became deaf at about age two, and she has siblings who are deaf. She is certified as an interpreter, which is the highest calibre in the profession. There are only 15 certified interpreters in B.C.

While there haven’t been complete census reports on it, she estimates there are more than 5,000 people who are deaf in the Lower Mainland.

"This isn't about me as an interpreter being on screen — this is about the deaf community understanding the severity of what's going on," she added.

But Hawkins hopes the increased profile of sign language interpreters will prompt more people to consider learning the language or to become interpreters.

When governments started using sign language interpreters to spread information about coronavirus, concerns emerged, however. Some media would zoom into the officials and inadvertently cut ASL interpreters out of their shots.

“There were about eight or nine agencies that wrote letters that said, ‘You need to stop cutting the interpreter off because we can't understand what's going on.’ Now, you're seeing we're both on the screen,” Hawkins said.

Another concern is that someone posted dozens of screenshots online taken of Howard performing various signs, with English words underneath that don’t match the signs, such as “air quotes,” “hard no” and “wut,” “simmer down” and “I’m shook.”

Whoever did it may have meant no harm — they mention they’re a fan, wrote that the site is meant to be funny, they don’t mean to offend anyone, and ask individuals to support the deaf community — but it hasn’t gone over well in the deaf community. Some feel it’s insulting.

“The service we're providing is access and communication and it's not about mocking this visual language,” Hawkins said.

Hawkins’ contract with the city is through an organization called Wavefront Centre for Communication Accessibility.

“What's important and what's cool is that the city is actually working with a centre of communication excellence that deals with deaf community members, and so they know what the needs are. So, if there are things that we need, the communication is right there — they've got the expertise,” she said.

The World Federation of the Deaf also put out guidelines for broadcast interpreting on March 24, pointing out that more than 70 million deaf people throughout the world have the right to access information in their national sign languages on the coronavirus pandemic.

The key points the organization included are: