Charges are pending against two seniors after an alleged soup assault at a Burnaby mall on Saturday.
0
Jul 9, 2019 12:40 PM By: Cornelia Naylor

Charges are pending against two seniors after an alleged soup assault at a Burnaby mall on Saturday.

At about 12:30 p.m., Burnaby RCMP responded to a report from a 43-year-old woman that an elderly couple had splashed hot soup in her face in the food court at Crystal Mall – an East Asian-oriented shopping centre at 4500 Kingsway in Metrotown. 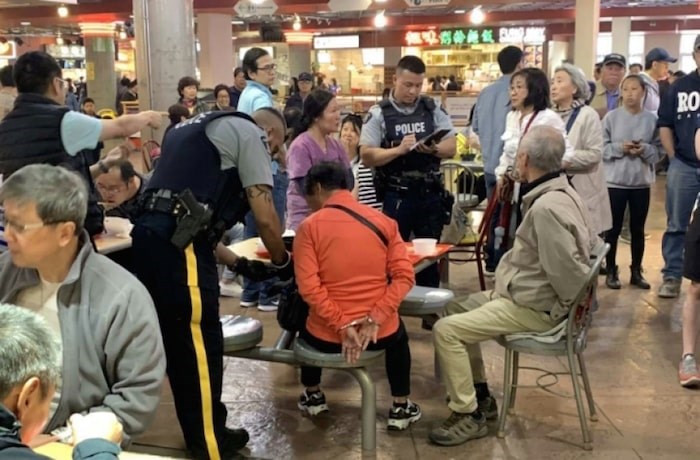 A photo posted on the Chinese social media channel WeChat shows an elderly couple being arrested at Crystal Mall after they allegedly threw soup into another woman’s face Saturday. Screenshot/WeChat

Officers located the alleged victim and the couple at the mall.

The parties involved were not known to each other, according to an RCMP statement.

Witnesses told police the altercation had ensued after the woman and the couple, a 79-year-old woman and an 84-year-old man, got into an argument.

Police said the woman “did not suffer apparent physical injury and did not require an ambulance.”

A Mandarin speaking Mountie explained to the couple that the alleged incident constituted assault contrary to the Criminal Code of Canada and told them their rights.

The pair were then arrested without incident and taken away in a police vehicle before being released on a promise to appear.

Chinese language media reported on the incident after it sparked heated discussion on Chinese social media.