A once-in-a-generation bloodletting is killing small, independent business in South Granville, leaving dozens of Vancouverites without a job before year’s end.
0
Oct 18, 2019 4:09 PM By: John Kurucz 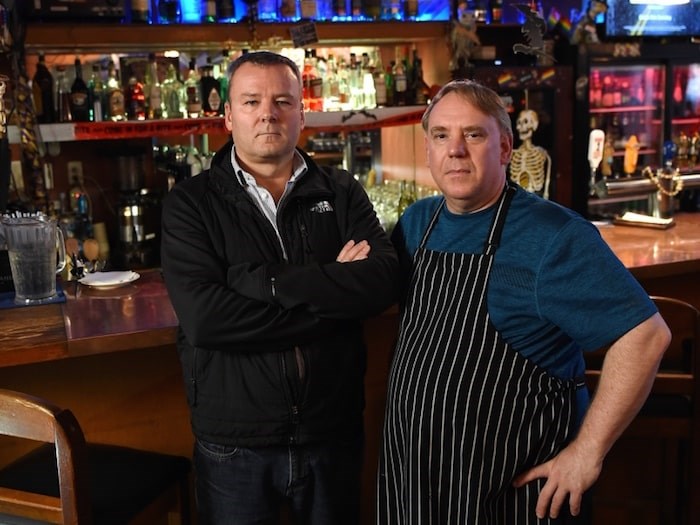 A once-in-a-generation bloodletting is killing small, independent business in one of the city’s marquee commercial districts, leaving dozens of Vancouverites without a job before year’s end.

The Ouisi closes Oct. 26, Plum is done at month’s end and West will close on New Year’s Eve.

That’s 65 years’ worth of neighbourhood business gone. Plum and the Ouisi are owned by Vancouverites and staff dozens who live in the city as well.

“I don’t think I’d recommend my daughters to go and become entrepreneurs, at least in this city,” Plum co-owner Ed Des Roches told the Courier. “In small business, things change so fast and there’s so much disruption nowadays that it’s impossible to enter into an enterprise thinking that this is what you’re going to do to support your family.”

The Courier counted 25 for-lease signs along a 10-block span on Granville Street and spoke to numerous business owners. 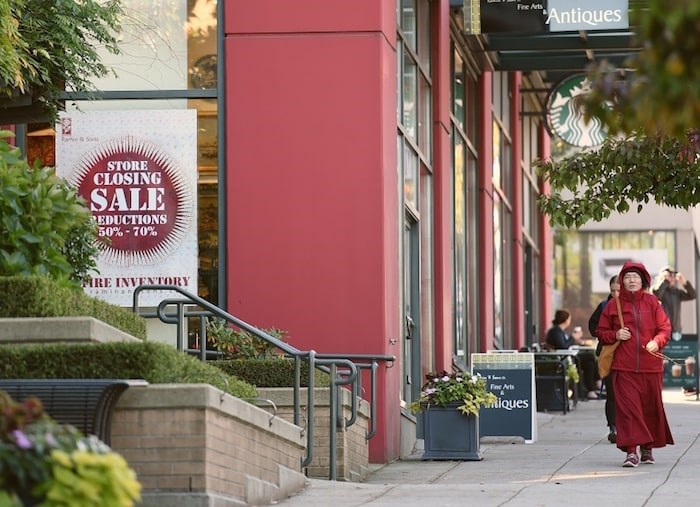 After 10 years at Granville and West Sixth, Ramin and Sons Ltd will soon close. Photo by Dan Toulgoet

Circumstances differ slightly in each case, but there are common talking points uniting them all: skyrocketing property taxes, fractured lease negotiations and minimum wage increases are killing them.

Des Roches once had nine stores across B.C. and Alberta, employing close to 2,000 people. Most of Des Roches’ employees were women and he paid millions in property taxes in Vancouver, Kelowna, Victoria and Calgary. Five of his stores closed this year, resulting in 65 job losses. His Kitsilano store closed in 2018 after 37 years, while his shop at Granville and 12th has been there for close to two decades.

There are mitigating circumstances in Des Roches’ case above and beyond property taxes, of which he pays $60,000 annually. Changing trends in women’s fashion and off-shore production have forced the business to change and, at 68, Des Roches is looking to retire.

“I invested quite a bit of money to try and accommodate that and make changes in the company, but I was never seeing a return on it so that put us quite a bit into debt,” Des Roches said. “We really haven’t been making money for a number of years. I’ve had the business up for sale for the last couple of years and nobody’s interested.”

Rob Clarke has owned the Ouisi Bistro since it opened on Granville and 14th in 1994. The area’s lone live music venue goes silent on Oct. 26 as a result of lease negotiations that would have doubled his costs.

Sixteen people are out of job, all of whom live in Vancouver.

Clarke said every cost in his world has gone up beyond a point that can be recouped: property taxes, food costs, insurance, utilities and garbage pickup. Even televising sports on the bar’s TVs has become more expensive, after Bell and Rogers increased fees for establishments with liquor licenses. 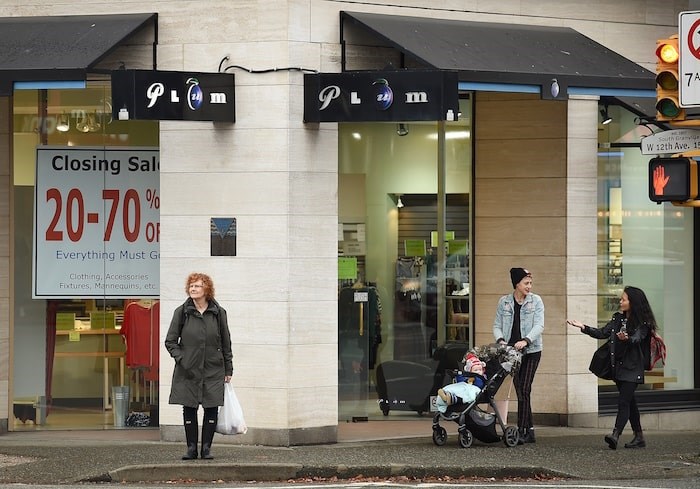 Numerous businesses along Granville Street are closing, including clothing store Plum, which had been in the area for 20 years. Photo by Dan Toulgoet

But it’s the minimum wage hikes in particular that have killed Clarke’s business model. He and others in the food service industry argue that because servers can make big money in tips, the minimum wage increases have thrown the financials out of balance.

“The minimum wage increase was the final straw that broke the camel’s back — we’ve had three successive wage increases in 30 months,” he said. “The last one in June, that was it. We were killed.”

Clarke agrees with Des Roches’ suggestion that young people shouldn’t risk entering the small business sector in Vancouver. His eldest daughter recently moved from Vancouver once she graduated from high school, as will his 14-year-old son. Clarke will leave town once his youngest has graduated.

“It’s critical,” Clarke said of the precarious business climate on South Granville. “We’ve been trying to warn the city about this for years. The system is broken.”

Owen Knowlton is the restaurant director at West Restaurant and has worked there for 15 of its 20 years. He didn’t get into any financial specifics other than to say the restaurant’s closure comes as a result of failed lease re-negotiations. All of the affected staffers are being offered jobs at other establishments that operate under the Toptable Group banner.

In the 60 years that Knowlton, Clarke and Des Roches have been in the area collectively, they’ve never seen the amount of turnover, vacancy or uncertainty they see today. 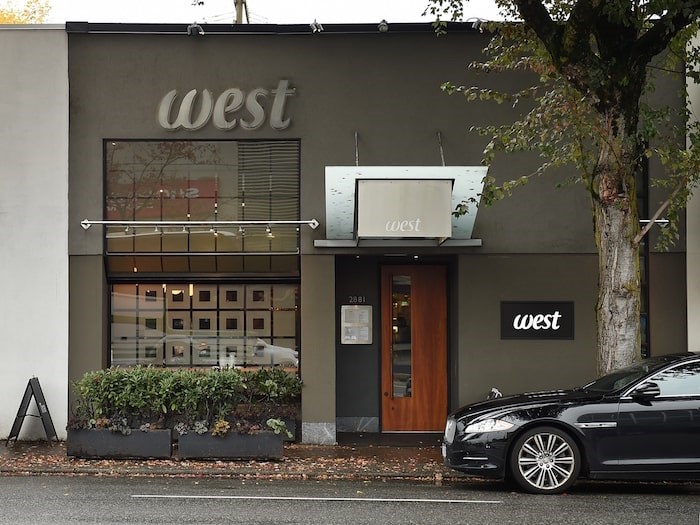 “What was expected from this area 15 years ago, it never made it,” Knowlton said in an interview. “A lot of South Granville is changing. A lot of the high-end galleries and all of the nice establishments have kind of moved on. It’s a different feel here nowadays.”

Ramin Rahim’s moved into the neighbourhood 10 years ago and had to wait months for an opening near West Sixth and Granville where his fine arts and antiques business Ramin and Sons sits. He spoke to the Courier on a day when three for-lease signs are displayed on his block alone.

Rahim’s store will close as soon as he gets rid of all his inventory. He has to be out by March 2020 at the latest, when his lease ends.

Taxes and the minimum wage increase have been Ramin and Sons’ death knell. Clientele is down, overhead is up and hiring staff is impossible.

“It is really sad what is happening here,” Rahim said.

South Granville Business Improvement Association executive director Ivy Haisell said problems facing the neighbourhood only became apparent in May. Until then, vacancy rates were among the lowest in the city, hovering around 10 per cent.

Haisell isn’t sure what changed last spring, but says speculative purchasing or development tied to the Broadway Subway announcement — which will have a stop in Broadway and Granville — isn’t to blame.

Instead, a confluence of factors have all come to surface at the same time: affordability is out of whack for both business and residents, the area’s aging demographic isn’t spending as much and getting the necessary permits from city hall is a drawn out, onerous process.

Legacy businesses — butchers, florists, produce stands — left the area in the last decade or two, and the children of those business owners either didn’t want to take over or couldn’t afford to, Haisell added. 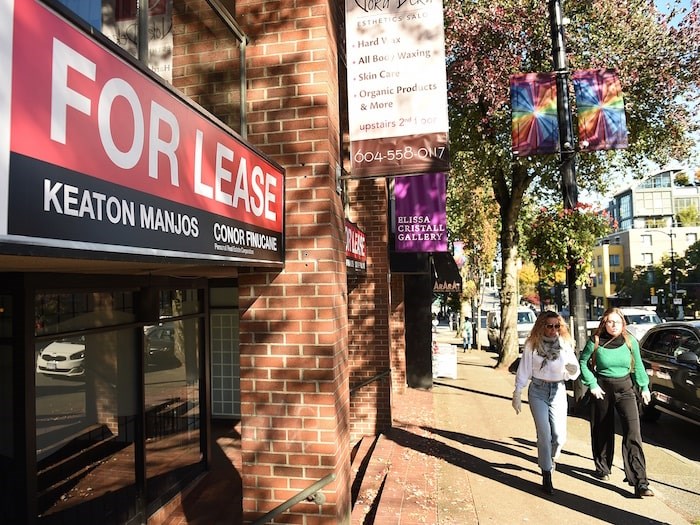 The Courier recently counted 25 for-lease signs along a 10-block span in the South Granville neighbourhood. Photo by Dan Toulgoet

Like others, Haisell says property taxes and the B.C. Assessment model of “best and highest use” for a plot of land is having devastating effects on locally-owned, independent business. The national and multi-national companies in the area — Starbucks, McDonald’s and the Brick, for example — are largely unaffected, or have a higher threshold to absorb the myriad of cost increases.

“The situation is critical,” Haisell said. “It’s not just in my area, it’s across the city. It’s just starting to hit South Granville and it’s really hard to do business.”

Haisell has looked into who owns the land in her area and suggests it’s largely the children of offshore investors. That second generation lives in the city, while their parents don’t, and those young people are making a living by running their parents’ investment properties.

Rosanna Petan has been in the area since 1999, first working alongside her dad and then eventually taking over his business, Frank’s Barber Shop. Her father established the business near West 15th and Granville in 1968 before it moved to its current location on West 11th Avenue, steps away from Granville Street.

She’s one of the few lucky ones in that her property taxes have remained relatively consistent since taking over the shop in 2004. Petan’s landlord owns several businesses on the corner of the block and is “very fair” when it comes to rent increases.

Still, the changing face of the area is a daily source of conversation in her barber shop’s three chairs. Petan said the neighbourhood’s business mix is totally uneven — too many high-end furniture stores and not enough of anything else.

“This is so sad. When we first opened, people were coming from everywhere. You don’t see so many people buzzing around South Granville anymore, even in the summer,” Petan said. “I keep asking ‘Where are all the people?’”

The city is working on a study that looks at the issues Petan and others have cited and a report is expected to go to council in November. Along with South Granville, five other shopping districts in the city are being examined: Collingwood, Commercial Drive, Hastings North (East Village), Marpole and West Broadway.

The report will focus on the seven-year period from 2012 until now and key in on business indicators such as: challenges the small business sector faces, the amount of change seen in those six districts, a review of best practices from other cities and suggestions for future policy decisions.

Bizmap is an online tool that’s based on info collected by the city, Small Business B.C. and BIAs. Data is combed from previous census information, and the website provides info on neighbourhood-specific demographics, rents, lease rates, populations and density.

Bizmap indicates 387 businesses operate in South Granville, and retail (at 37 per cent) is the dominant industry in the area. The website says average lease rates hover between $28 and $65 per square foot, but those who spoke to the Courier for this story place those numbers between $75 and $110.

By comparison, the leases rates on Robson Street are $140 per square foot, $60 in downtown, $41 on West Broadway and $29 in Mount Pleasant.

Clarke’s negotiations to keep the Ouisi going saw him faced with an offer of close to $100 per square foot.