Speed and alcohol impairment are to blame in a fiery crash March 18 in Coquitlam that killed a driver and destroyed a Tesla Model X.
Jul 9, 2019 3:32 PM By: Diane Strandberg

Speed and alcohol impairment are to blame in a fiery crash March 18 in Coquitlam that killed a driver and destroyed a Tesla Model X.

According to Coquitlam RCMP, blood taken by the B.C. Coroner Service showed the driver had three times the legal limit of alcohol in his blood at the time of the crash, which took place at 1 a.m. on Lougheed Highway near Alderson Avenue. 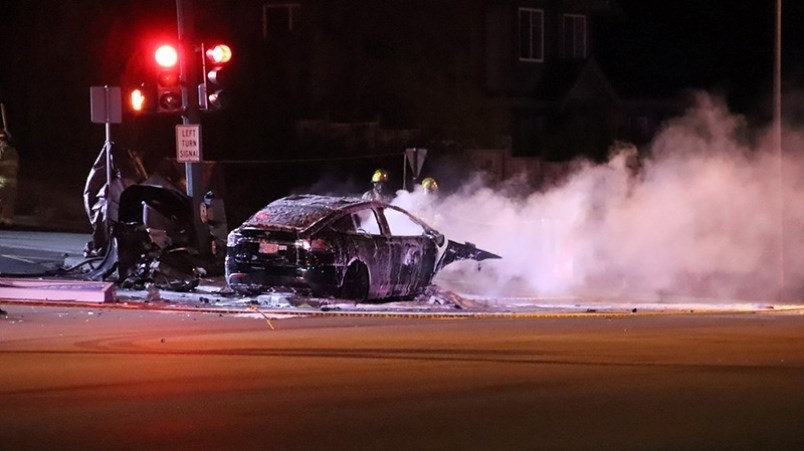 Speed and impairmentl not mechanical failure, were the key factors in a crash March 18 in Coquitlam that killed a man and destroyed a Tesla Model X. Photo by Shane Mackichan

“The medical coroner did the autopsy, we had access to the report,” said Cpl. Michael McLaughlin.

Investigation by the Criminal Crash Investigation Team and the Integrated Collision Reconstruction Section found the driver had been travelling at a speed of more than 150 km/h in a 60 km/h zone when he lost control of the car and slammed into a traffic pole. The car burst into flames.

Police now say the accident was caused by a combination of impaired driving and speed, ruling out mechanical failure and the fact that the car was an electric vehicle.

“There was a lot of speculation about what would be a contributing factor," McLaughlin told The Tri-City News. "It was important for us to clarify what actually happened, to give the public information to help them make intelligent decisions about their own safety.”

RCMP are not revealing the name of the deceased for privacy reasons but McLaughlin said the man was not a Tri-Cities resident.