Cyclists will once again be allowed to ride along Vancouver's seawall beginning today.

Stanley Park will also be fully reinstating vehicle access to the park, more than five months after the Vancouver Park Board first announced it was modifying access to the popular park in response to the COVID-19 pandemic.

"Previous years’ data shows a consistent decline in visitation to Stanley Park as the fall season approaches. With children back in school, and with COVID protocols and behaviours in place, the data tells us we can return the park to its conventional traffic patterns," said Dave Hutch, the City of Vancouver's director of planning and park development in a release.

Stanley Park was initially closed to all vehicle traffic on April 8 of this year, in an effort to reduce congestion and allow for greater physical distancing in busy areas like the seawall, and in response to public requests for greater access to essential recreational space for cycling and walking during the early stages of the pandemic.

As the province began easing restrictions and businesses in the park began reopening, Park Drive reopened one lane of vehicle traffic on June 22. However, the seawall stayed closed to cyclists, "to allow pedestrians greater space during the busy summer months when pedestrian and cyclist traffic in the park reached an all-time high," read the City of Vancouver's release.

In July, some local businesses and groups launched a petition calling on the Park Board to allow wider access to motor vehicles in the wake of these COVID-19-related cutbacks. The Change.org campaign titled "Keep Stanley Park open for all!" was petitioning the board against lane and parking reductions that it said could limit access "for people who choose to, or must, access the park by car in favour of a second bike route," as the Vancouver Park Board began exploring the long-term feasibility of reducing vehicle traffic in Stanley Park.

“The temporary traffic management plan in Stanley Park was always just that – temporary,” said Hutch in the release.

“We knew the summer was a critical time for Vancouverites to access recreation, nature, and green space, and the shared use of Park Drive allowed more than 720,000 cyclists to access a safe route, as well as providing increased space for pedestrians on the seawall."

Once Stanley Park fully reopens to vehicles and cyclists return to the seawall, City staff say pedestrians and cyclists will continue to be reminded to keep physical distancing in mind, "to ensure all users have the space they need to recreate safely." The Park Board said staff will also continue to monitor traffic levels and collect data within the park.

Hutch acknowledged that “A lot has changed since the early days of the pandemic."

He added: “While we are seeing an uptick in cases throughout the province, we also know a lot more now about how people can use outdoor spaces with lower risk and we are confident the public has developed a new understanding and appreciation for keeping distances outdoors. We will continue to take direction from the Public Health Officer and Vancouver Coastal Health and will monitor usage and risk.”

To accommodate the reopening, Stanley Park was closed overnight on Friday, Sept. 25 "to ensure the safety of staff as they work to remove equipment, traffic cones, and signage to restore the park to pre-COVID traffic access."

The Park Board will continue to restrict vehicle access to 700 m of Park Drive between Beach Avenue and Lagoon Drive,  maintaining the current traffic patterns that were implemented to support the City of Vancouver’s Room 2 Move program dedicating a portion of Beach Avenue to cyclists. 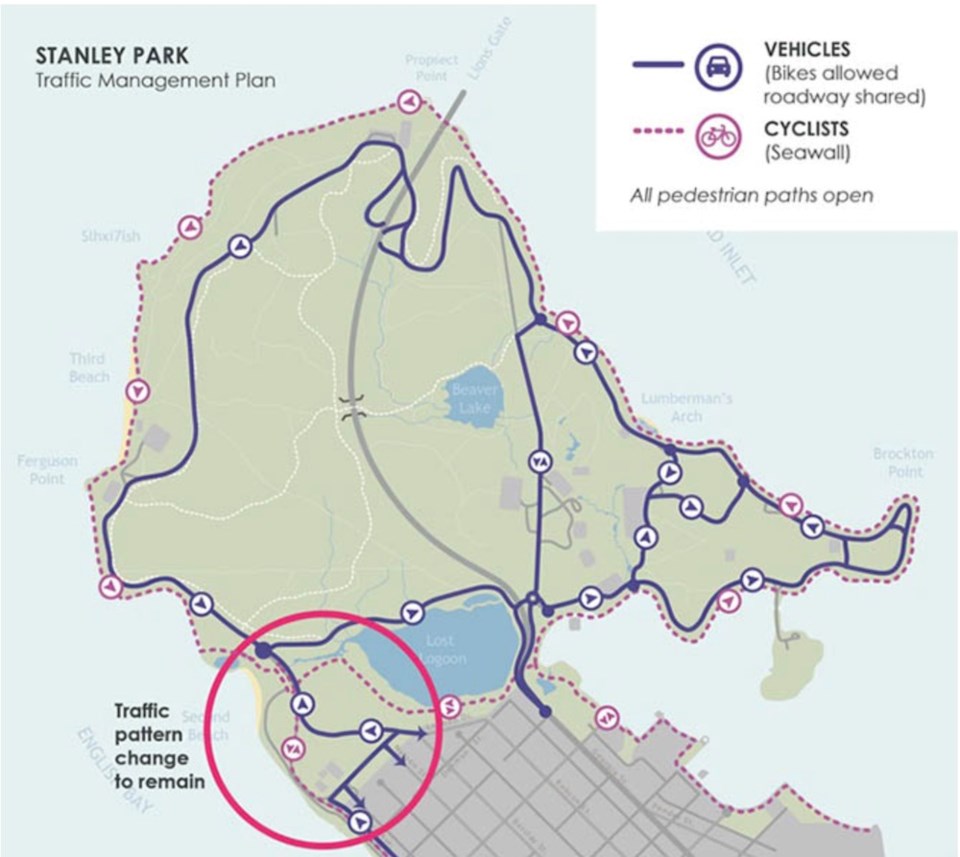 Full vehicle access to Stanley Park will be available at the causeway entrances, while all parking will be fully reopened (except for the parking near Ceperley Meadows).

A petition is calling on the Vancouver Park Board to increase vehicle access to Stanley Park
Jul 30, 2020 4:10 PM