When Liam Robertson made his way home from Surrey to Vancouver on Saturday, May 18, he never expected to see his friend’s stolen dirt bike alongside Stewardson Way in New Westminster.
0
May 22, 2019 2:24 PM By: Janaya Fuller Evans

Spotting the bike was a chance in a million.

When Liam Robertson made his way home from Surrey to Vancouver on Saturday, May 18, he never expected to see his friend’s stolen dirt bike alongside Stewardson Way in New Westminster. But that’s exactly what happened.

“I still don’t really believe it,” he told the Record. “I’m still blown away.” 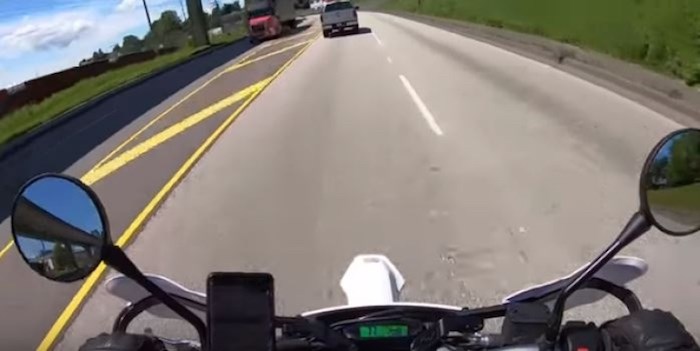 Robertson was able to get footage of two people pushing a dirt bike on a trail next to Stewardson Way on his helmet cam. He thought he recognized the yellow on the bike from a picture his friend had posted on Facebook of his dirt bike, which had been stolen six days ago.

He decided to get a closer look at the bike and rode onto the trail just as the two people were attempting to get it through a broken fence.

“I pretended I wanted to help them,” he said, explaining he wanted to get video of their faces and get a closer look at the bike.

He recognized some after-market parts his friend had added and was sure it was the stolen bike, so he called 911.

“I was definitely full of adrenaline at the time,” Robertson said of the incident.

New Westminster Police showed up within a few minutes and detained the two people, releasing one while the other was taken in, according to Robertson.

“I was very pleased with the response from the New Westminster Police Department,” he said.

The bike was found only a few blocks away from where it had been reported missing, Robertson said.

“It had definitely been ridden, the plastic was stripped, and it had been crashed at some point,” he added.

The Vehicle Identification Number was a match for the stolen bike, and Robertson’s friend was able to come pick it up then and there.

New Westminster Police have not yet confirmed the stolen bike was retrieved and have not said whether or not charges were recommended.