Strathcona Park assault victim lay in tent for up to 12 hours before 911 call: police

'Residents of the park are not being encouraged to call us during their time of need,' police say
Sep 23, 2020 4:12 PM By: Sarah Grochowski 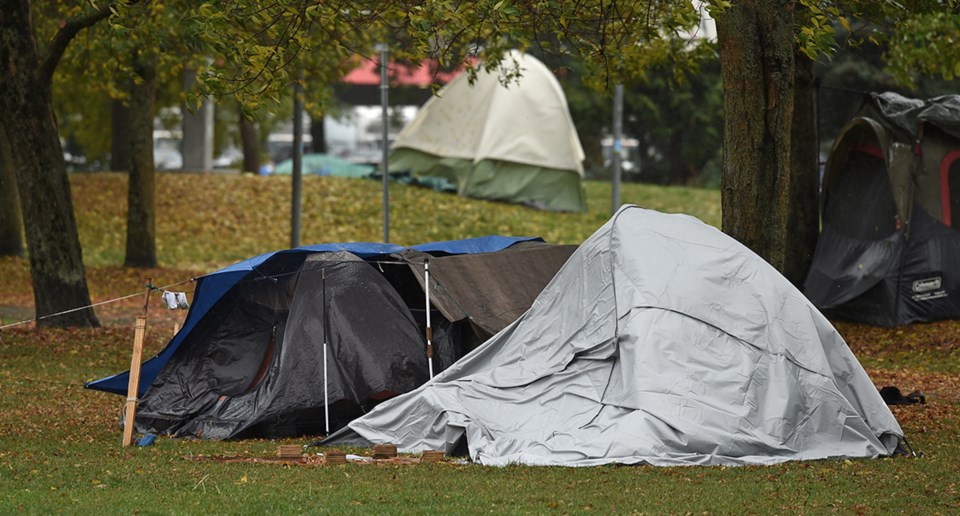 A man who was assaulted Monday night, laid in the Strathcona Park encampment tent for what police are estimating up to 12 hours. Photo: Bob Kronbauer

A man who was assaulted Monday night, laid in the Strathcona Park encampment tent for what police are estimating up to 12 hours before a 911 call was made.

The person who did make the call for help – prompting paramedic services – did so anonymously according to Vancouver Police Department Cst. Tania Visintin.

“According to a witness, the man had been lying there for some time before paramedics were called,” the officer relayed.

They rushed the victim – who is believed to be in his late 20s, with dark hair and chin beard, and possibly Caucasian or Indigenous – to a nearby hospital.

It was hospital staff who alerted the police that an assault was the cause of the man's injuries, which has left him in critical condition.

“This is a disturbing case, considering how seriously the victim was assaulted and the length of time he was laying on the ground injured without any help," said Visintin.

Since the pandemic was first declared in mid-March, weapons and assault calls to police for the Strathcona area have increased.

In one case, a loaded semi-automatic rifle was found near the park, at Prior Street and Heatley Avenue Sept. 10.

"The type of crime is escalating," she explained, "I've had people try to break down my door."

Lewis and others in the neighborhood are awaiting a city staff report on future options for the 400-person encampment.

The report, scheduled for Oct. 2, "is not going to come soon enough. We can't wait any longer," Lewis said.

"This isn't about homeowners, this is about the fact that campers aren't safe."

We care about the wellbeing of everyone in this neighbourhood. #Strathcona is home to young families, people in social housing, refugees, seniors and residents, with many low- and modest income earners. Everyone deserves safe housing; the #encampment in #Strathconapark isn’t safe

During a press conference Wednesday morning Visintin said "police have been hearing that residents of the park are not being encouraged to call us during their time of need."

She said, "when police do enter the park we are met with extreme hostility by residents of the park."

Police are asking Strathcona residents to come forward with information about the assault by calling VPD detectives at 604-717-2541.

VPD arrest 14 homeless and supporters squatting in elementary school
Apr 19, 2020 12:41 PM
Comments
We welcome your feedback and encourage you to share your thoughts. We ask that you be respectful of others and their points of view, refrain from personal attacks and stay on topic. To learn about our commenting policies and how we moderate, please read our Community Guidelines.