A plane was forced to make an emergency landing at Abbotsford International Airport due to a "bird strike" on Tuesday, Sept. 10.
0
Sep 10, 2019 12:10 PM By: Elana Shepert 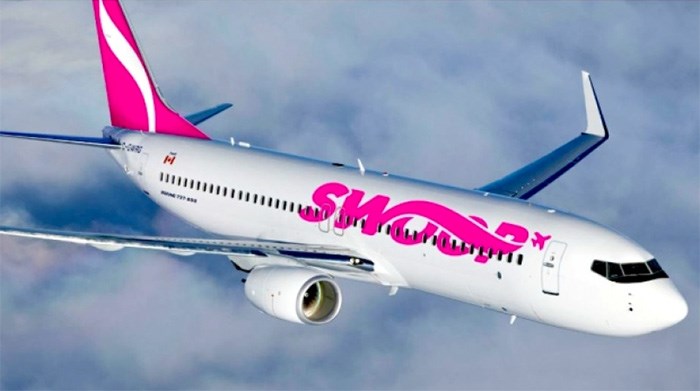 None of the deals listed on the Swoop Airlines website Thursday had price tags exceeding $100 for flights across Canada. Photograph By WESTJET

A plane was forced to make an emergency landing at Abbotsford International Airport due to a "bird strike" on Tuesday, Sept. 10.

Swoop Flight 312 departed from Abbotsford at 8:15 a.m. on route to Edmonton, but the plane had to turn back and land after it struck a bird (or birds).

People took to social media to share what they saw from the ground as the plane struck the feathered creature(s), which included fire, smoke and loud noises.

Not sure what just took off from #YXX, a 737 of some brand, but it was booming 6-7 times while climbing and small bursts of fire/flames. Was like a backfiring car, but a jet engine at altitude. Lost it in the clouds not sure if circling back? #abbotsfordbc @westjet @flyswoop

Abbotsford Airport also tweeted about the incident, noting that the aircraft landed safely and that passengers were also offloaded into the terminal safely.

There was a birdstrike at YXX - the Aircraft has landed safely passengers have been offloaded into the terminal safely. Updates will be available in the coming hours.

Swoop tweeted that the bird strike took place shortly after departure and that all passengers were safe.

"We can confirm Flight 312 landed safely in Abbotsford due to a bird strike shortly after departure," wrote the airline.

"All travellers were offloaded safely and without incident. Thank you to our captain and crew for ensuring the safety of our travellers."

Donna-Lee Rayner shared a post about her experience on board the flight, noting that she hear a loud, "thud thud thud thud." She also added that there was smoke and the smell of burning and that the intercom said that, "one of the engines sucked up some geese."

Vancouver Is Awesome reached out to Swoop for details and has not received a response at this time.