Vancouver’s lingering hotel workers' strike appears to be coming to an end with news from the union that it has reached what it called a “tentative” agreement with management at four hotels.
Oct 16, 2019 6:48 AM By: Glen Korstrom 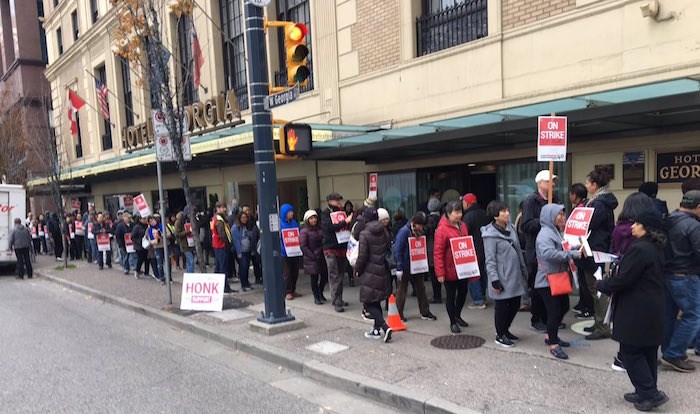 Workers strike outside the Rosewood Hotel Georgia in Vancouver. @uniteherelocal40/Twitter

Vancouver’s lingering strike at four downtown Vancouver hotels appears to be coming to an end with news from the union that it has reached what it called a “tentative” agreement with management at the Westin Bayshore, Hyatt Regency, Pinnacle Harbourfront and Four Seasons hotels.

The strike was disrupting corporate events and putting a strain on guests at the hotels as well as prompting some guests to cancel their stays.

No tentative agreement has yet been reached at the Rosewood Hotel Georgia, and picketing continues at that hotel, according to the union, Unite Here Local 40. The union did not say how bargaining is going between it and management at that hotel.

Hotel Georgia ON STRIKE! We will continue to picket from morning to evening, through the rain and cold, until all of our members get the contract they deserve! @rwHotelGeorgia, Canada's #1 hotel, can you hear us? One job should be enough in #Vancouver! #bclab #canlab #yvr #canada pic.twitter.com/g3jdksLZs2

Business in Vancouver reached out to the union for more clarity on whether its tentative agreement for the four hotels means that striking has ended and that employees will be back on the job October 16. No immediate answer was forthcoming. It is also not clear when workers would vote on the pact.

The Retail Council of Canada plans to go ahead with its Retail West conference at the Hyatt Regency on October 16 and has told attendees to enter the hotel through the attached Royal Centre shopping mall as a way to avoid crossing a picket line.

BIV also reached out to the employers and did not get an immediate response.

“This ground-breaking agreement secures significant wage increases for hotel staff over a four-year period, implements protections against sexual harassment, strengthens job security for room attendants and kitchen and restaurant workers, and maintains health insurance,” the union said in a statement.

The union did not say whether employers increased their offer of 15% over four years.

Instead it included a statement to be attributed to Pinnacle Hotel

Habourfront room attendant supervisor Teresita Gonzales, which noted that Gonzales is “very happy about the workload reductions for room attendants.”

She also lauded job security and said that the workers feel “united and strong.”